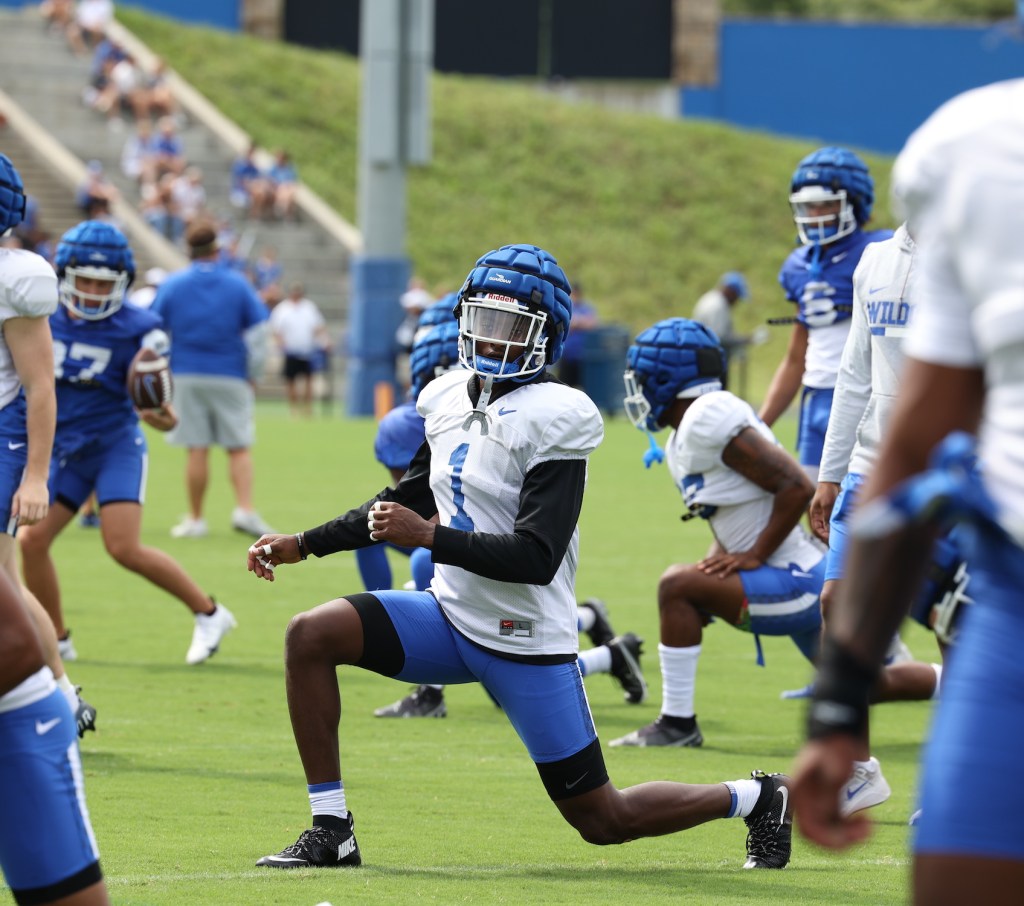 Keidron Smith had 223 tackles and five interceptions in four years at Mississippi before he transferred to Kentucky. (Photo by Vicky Graff)

Keidron Smith really won’t say a lot about why he left Mississippi where he was a productive defensive back for four years but he quickly makes it clear he’s happy to be at Kentucky.

“I am blessed for coach (Mark) Stoops to give me the opportunity to be here,” said Smith. “I believe I can add leadership to the corner(back) group because they are young. I have a lot of experience and can help those young guys grow up faster. We have big goals and I think we can reach them.”

Kentucky’s secondary had issues at times last year and is considered one of the team’s question marks going into this season. Smith knows the UK defensive backs have a chip on their shoulder over that perception.

“That is one of the reasons I came here. Everybody is hungry. (Senior linebacker) DeAndre Square told me they want to take that next step and I am here to help them do that,” Smith said.

He wouldn’t bite when asked what the SEC perception of Kentucky’s defense is.

“We will see what happens. Let what we do on the field dictate everything for us and do our talking,” Smith said. “The life of a DB for anyone who has ever played that position is that you get beat sometimes. You are the last line of defense, so you are going to take the most heat. On television that’s what looks like messes up the most. Live by it, die by it and play the next play.

“Everybody is on scholarship that plays on Saturdays. Those offensive guys are as good as you. Execution is what comes into play and believing that you can win the battles.”

Smith played against Kentucky in 2020 when Ole Miss won 42-41 at Kroger Field. Current UK linebacker Jacquez Jones, Smith’s roommate at Ole Miss, also played for the Rebels in that game before transferring to UK last season.

Jones quickly reached out to Smith when he put his name into the transfer portal but Smith didn’t let that friendship make his decision. Instead, it was a PowerPoint presentation by the UK coaching staff on what the team has done since 2018 that sold him.

Stoops has praised Smith often, including SEC Media Days. The veteran defensive back has not let the praise change him.

“I hold myself to a standard. I come into a program and I want to add to it. I don’t want to be a distraction. Coach Stoops has a great thing going and that’s what I came to join and help make even better,” he said.

Junior Carrington Valentine is one player Smith knows is better than he was last year when he had 61 tackles, five pass breakups and one sack in 12 starts.

“He has things he can still improve on. He was so young last year when he played more snaps than anybody in his first year of really playing. He’s going to be a great guy this season,” Smith said. “I came here to try to improve him and uplift him as an older guy that has experience in this league. He could be a great playmaker this year.”

Defensive coordinator Brad Smith brought in three transfer defensive backs but Smith is the only one already tested against SEC competition.

“He’s smart. He’s savvy. He picked things up really quickly because of his experience,” White said.

Now Smith is anxious for the season opener against Miami Sept. 3 to get here so the players can put together a special season.

“The players are the leaders here. The coaches are there, but this is a player-led program and we want to show what we can do,” Smith said.