Horsin’ around; Winchester first-grader arrives for first day in style 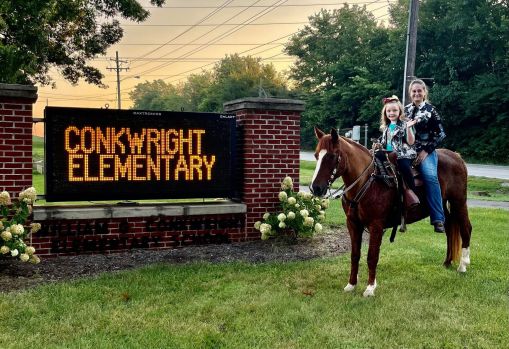 Caycee Taylor made sure that her niece, Bristol Borders, showed up to the first day of school in style. (Submitted photo) 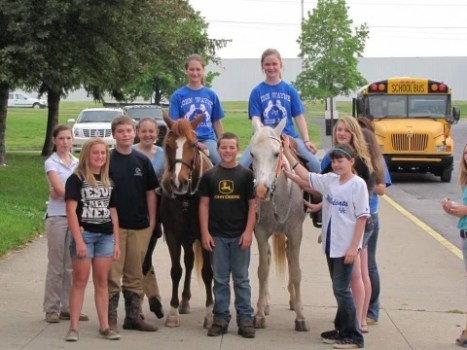 Taylor showed up on Cassie toward the end of her eighth grade year when Conkwright was still a middle school. (Submitted photo)

When students at Conkwright Elementary School in Winchester arrived for their first day of classes last week, some arrived via bus or car, but first-grader Bristol Borders traveled to school via horseback.

Showing up to the former middle school on a horse named Cassie is a family tradition that goes back 12 years.

“It started back in 2010. I saw an article that a boy in Massachusetts got suspended for riding his horse to school as a knight. They were having a [medieval] fair that week, and they called it a deadly weapon. I thought that was absolutely ridiculous,” said Border’s aunt, Caycee Taylor. “So I decided that the last day of my eighth-grade year, that I would ride my horse to school in support of the boy who rode his horse.”

Taylor already shares riding as a hobby with her niece and wanted to give her the same special memory.

“She’s been riding since she was a year old, and I’ve been riding by myself since I was two. I still have the same horse … I was like, ‘Let’s ride the first day of school,” Taylor said.

Riding horses on Kentucky roads is not illegal – horse racing on them is prohibited – so the unorthodox commute to school was on the up and up.

Taylor said that she brought Cassie into town in a trailer and that the ride commenced from her church. The trip took around 15 minutes to make.

Of course, the second the trio turned up on school property, they became instant superstars.

“They loved it … They were all waving and taking pictures,” Taylor said about the reaction to her and Bristol’s arrival.

One family sent Taylor a message thanking them for helping ease their youngster’s nerves.

“They said that their kids were very nervous for the first day of school and that when they saw the horse, their worries went away. They were smiling and laughing instead of being terrified,” she said.

The trek to school is not the only time the family has made someone’s day on horseback.

Taylor said they regularly ride in the Winchester Christmas Parade and often take the horses through the drive-thru at the downtown Dairy Queen.

Besides riding for leisure, both aunt and niece ride competitively and have championship titles.

“She is a firecracker. She has been barrel racing with me for three years now,” Taylor said about her niece’s riding experience.

Will more trips to school or Dairy Queen on horseback, be in Borders’ future? Perhaps.

One thing is sure, though, the first-grader is doing her best to carry on the family equine legacy.