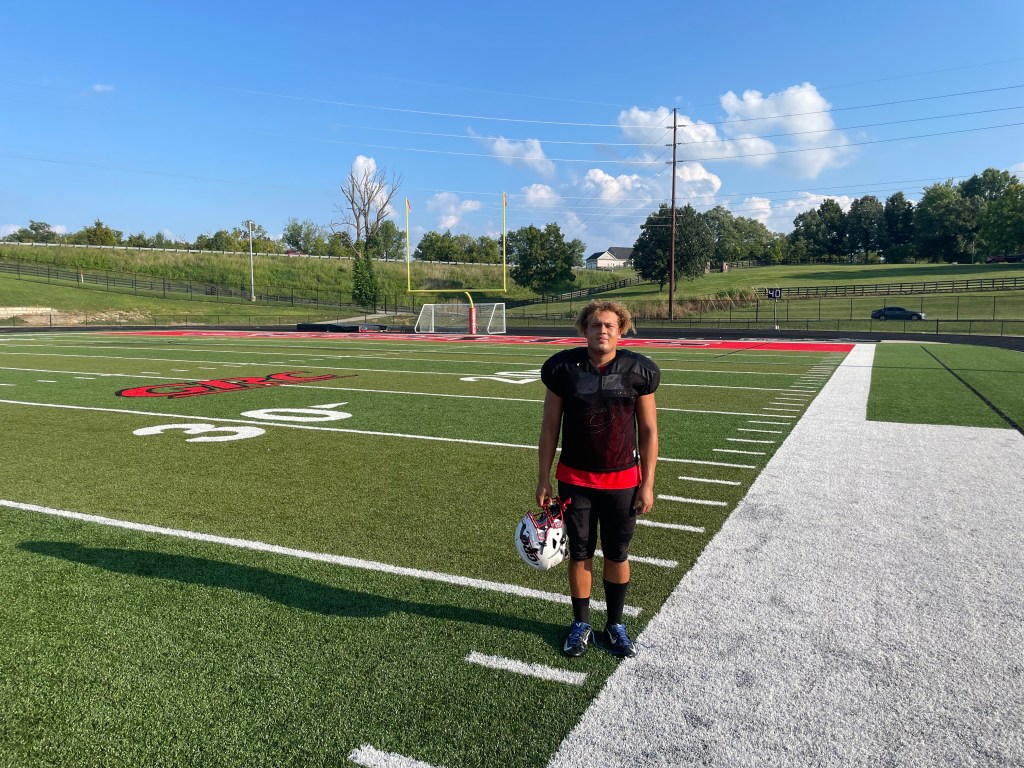 When he started playing high school football, George Rogers Clark senior Kareem Guerrant saw himself as a running back.

However, he has since transitioned to defensive end, which has worked in his favor.

In last Friday’s season-opening 28-0 win against Cooper, Guerrant scored on a blocked punt while using his offensive skills on a fake punt to carry the ball deeper into Jaguars’ territory, leading to the Cards’ second touchdown just before halftime.

“Coach called a play for one of us to blitz, and [Sam Clements] blocked it,” said Kareem Guerrant. “He made the play, and I finished the play. It was a team effort.”

Guerrant started playing on the gridiron in fourth grade, mainly as an activity to keep him from spending too much time at home.

However, it wasn’t until three years later, as a seventh grader, that he discovered football is his passion.

Initially looking to play linebacker, Guerrant got some time in at the running back position and was able to rush into the endzone on more than one occasion.

“I’m like, ‘You know what, I’m gonna start working on this and becoming greater’ because I liked the competition and I liked the work ethic.”

With the arrival of Coach Joe Chirico at GRC – and the presence of Kalen Washington in the backfield – Guerrant made something of a full-circle turn, arriving at defensive end starting last season.

“Some of our linemen were out of shape, and I was in shape. They wanted to try me out”, Guerrant said. “I ended up being good at it, and now I’m practicing so I can become great at it.”

His efforts in games and practice haven’t gone unrewarded.

Along with star play in the season opener, Guerrant’s game caught the attention of Union College, an NAIA school in Barboursville.

As a result, Guerrant received the first of what he hopes will be many scholarship offers.

Also a member of the school’s basketball team, Guerrant believes being surrounded by a winning culture can only help the team further.

“They know how to win, and when you win, it feels good,” he said. “If we keep on winning, it’s going to feel really good.”

And while individual goals are lofty, Guerrant also focuses on team goals.

“I want to be top for Clark County before I leave. We want to prove the point that … We’re strong, and we’re getting better as a team and everybody overall”, he said.