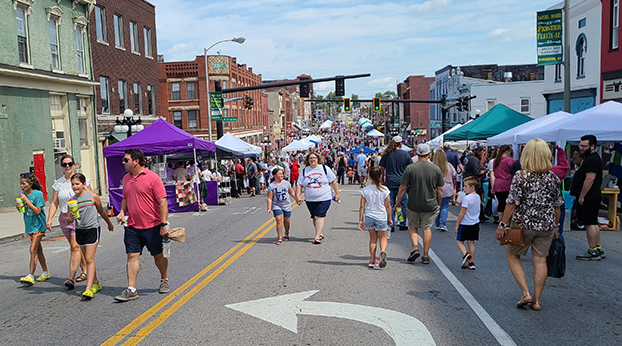 One of Winchester’s favorite traditions, the Daniel Boone Pioneer Festival, will return to the downtown area for its 43rd iteration on Labor Day weekend, Sept. 3rd and 4th

Erika O’Brien, a Daniel Boone Pioneer Festival Committee member, explained that the committee was pleased with how the planning process went this year.

“It has gone pretty well. We’ve had a lot of turnout as far as being interested in participating. I think that people are excited to get out and about,” she said.

The festival begins at 8 a.m. on Saturday with the annual George Rogers Clark Track and Cross Country Daniel Boone 5K to honor David Borden. This year the course begins and ends at the intersection of Hickman and Lincoln streets. Registration is $25, but the price will increase after Sept. 1st.

The central portion of the festival opens at 9 a.m. and closes at 6 p.m. and will include arts and crafts, children’s activities, and a full line-up of live music.

“That is always popular, and we get a good turnout for that,” O’Brien said.

The George Rogers Clark cheerleading squad will host a Walk With Friends event at 6 p.m. on Depot Street.

And then, to end the day on Saturday, it will be time for the community to boogie.

“There will be a street dance that is free for the community on the courthouse steps, and this year we are featuring a reunion between The Classics and Prime Cut. They are both local bands that have played in the community and throughout the Bluegrass for years … They have pretty much quit playing, but they are reuniting for us one more time for this concert.”

Sunday begins bright and early at 8 a.m. with a community worship service led by First Christian Church on the courthouse steps.

The main thoroughfare again opens at 9 a.m. but will close at 5 p.m.

Parking downtown is limited, but spaces will be open at Robert D. Campbell Junior High School on Boone Ave. A free shuttle service will be available all day to transport festival-goers from the school to one of three locations.

The festival was founded in 1978 by the Winchester Art Guild as a way for local artisans to display and sell their wares. Initially, the event occurred on the Clark County Courthouse steps, but as the festival grew, thousands began attending. By the 1980s, the event had moved to College Park, where it stayed until 2019.

Making the move was a hard decision for festival organizers.

“We have a lot of sentimental attachment to the park just because it was there for so many years,” O’Brien said.

But necessity – and a global pandemic – required it for various reasons.

“We had unfortunately outgrown the space, and we were really packed in there, and we were not able to add any new vendors,” O’Brien said. “Then when Covid came around, there was no way we could participate in the park because everybody would have been so crowded. There would have been no way to do any social distancing whatsoever.”

Moving downtown ensured that Covid-19 safety guidelines could and would be followed and that the festival could better cope with the more unpleasant side of Mother Nature.

“The other issue that we faced at the park was the mud. It is unfortunate it seems that the Pioneer Festival has a black cloud of rain that hovers over it every year,” O’Brien said. “There is not as much mud downtown.”

In the past, the festival committee spent thousands of dollars on hay to soak up water from the rain. One year a powerful storm blew in, and the resulting deluge flooded the park and damaged some vendors’ property.

“Those of us working the information booth were standing in water up to our ankles,” O’Brien recalled.

Another benefit of moving downtown was that the event was a potential boon for restaurants near the city’s center.

“By having the event downtown, you bring in a big crowd of people and hope some of them will dine in our restaurants or stop in our boutiques and stores,” O’Brien said.

Admission to the festival is free. For more information or to register for events, visit the festival’s website www.danielboonepioneerfestival.com.