Second Thursday program is back at Bluegrass Heritage Museum 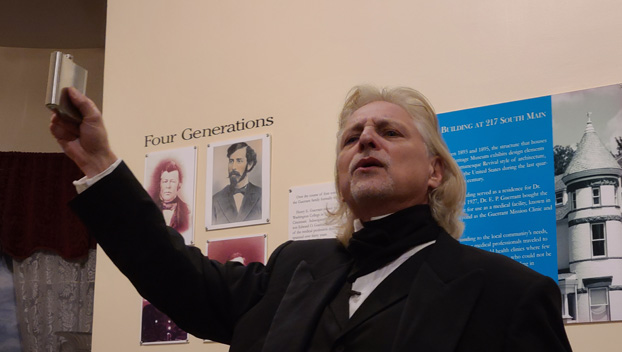 Henry Clay (Kevin Hardesty) toasts the audience at the Bluegrass Heritage Museum during a past Second Thursday program. (File photo by Warren Taylor)

A museum that no one visits might as well be an empty building.

So, when she became the new head of the Bluegrass Heritage Museum, 217 South Main Street, in 2006, Sandy Stults decided, “I wanted to bring people in,”

That’s why she started the Second Thursday programs. Those programs, then and now, have always started at 6:30 p.m., been free, open to the public, and with refreshments provided by museum volunteers.

The most recent Second Thursday speaker was best-selling author Dr. Maisha L. Jack. Raised in Winchester, Dr. Jack was a two-sport athlete who was the AP Kentucky Female Athlete of the Year for 1991. She later continued her athletic career at EKU, where she played basketball. Today, Dr. Jack is an educator, author, business owner, and mother of three.

The Second Thursday speaker on September 8th will be singer Jessica Begley from Powell County, a teacher, a former member of the Appalachian Troubadours, and a former performer at Renfro Valley Entertainment. This event will be held on the patio, weather permitting. Doors open at 6 p.m. The event begins at 6:30 p.m., followed by a question-and-answer period and light refreshments.

Stults said she is still working to finalize this fall’s other Second Thursday events and speakers but does anticipate that they will include local historian Jerry Cecil, Eddie Price, and the museum’s annual tree and wreath decorating contest in December.

She also said the museum’s biggest problem is getting people interested in local history. But there are some upcoming events she anticipates will bring people in, including trolley tours in May 2023. Later, next summer, a Smithsonian Institution exhibit called Spark! Inspiration will feature exhibits from the Washington, D.C .museum, plus Winchester innovations related to the telephone, Homer Ledford, and the hospital. The exhibit will be in the house behind the museum from June through August.

The Bluegrass Heritage Museum is a popular place every month because of the Second Thursday events. And it certainly makes Sandy Stults smile to see the museum busy and filled with people excited about local history.