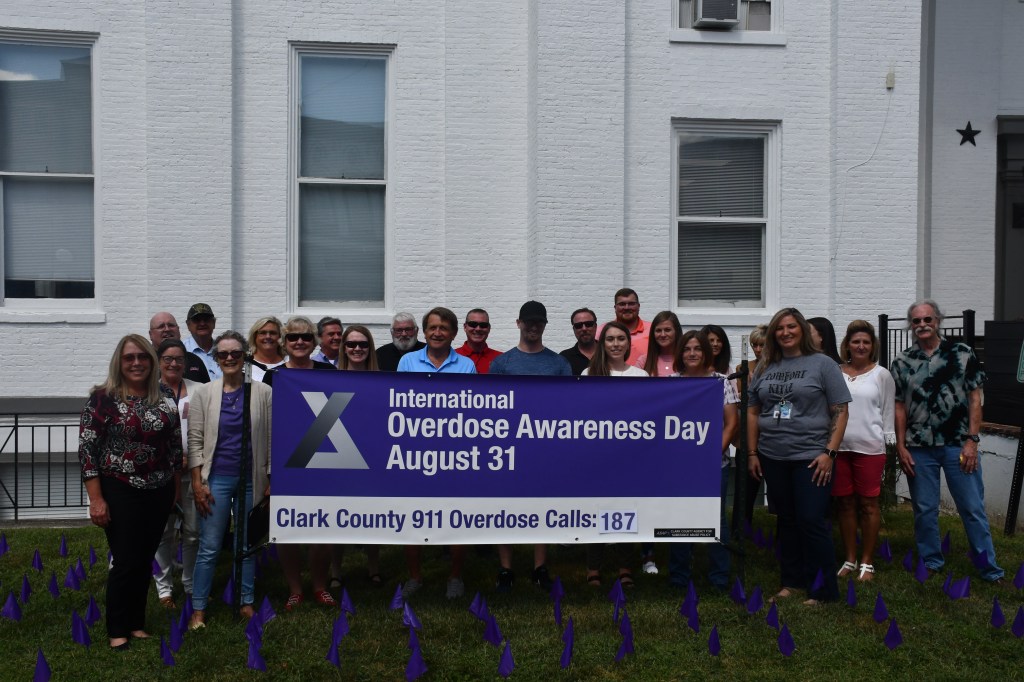 A crowd gathered at the Clark County Courthouse on Wednesday to commemorate International Overdose Awareness Day. (Photo by Matt Cizek)

Drug addiction affects thousands, if not millions, of individuals each year.

On International Overdose Awareness Day this Wednesday, August 31st, a large gathering of Winchester residents gathered in front of the Clark County Courthouse to bring awareness to those in the community who have battled it.

“Today’s event was to recognize the number of overdoses in our local community, but at the same time, it was also to recognize the number of people who, because of community efforts including the distribution and education of people [about] Narcan and other overdose prevention … Have been saved”, said social worker Ron Kibbey, who spoke at the event.

In 2021, 187 overdoses occurred in Clark County, resulting in 30 deaths. While a tragic number, this also means 157 individuals survived.

The courthouse’s outside lawn was decorated with purple flags.

“It’s an important event for the community. It’s a dramatic event because those flags represent those individuals who had overdose events that were reported to EMS”, Burtner said. “187 is a very large number that demonstrates that it’s still a very important issue in the community, and we need to keep on working to do everything we can to prevent drug overdoses.”

Not long ago, Clark County was one of sixteen counties in the state of Kentucky to participate in the HEALing Communities Study, developed by the National Institutes of Health, aiming to reduce opioid overdose deaths by at least 40 percent over three years.

During this time, a subcommittee was formed to address the problem.

Although Clark County’s portion of the study is over, efforts toward community-wide curtailing of opioid addiction and more persist.

“We’re going to continue on as a local group to combat overdose deaths, overdoses in general, the stigma associated with Narcan, and stigma associated with medications for opioid use disorder,” said Clark County Judge-Executive Henry Branham. “You see all the education here. You saw local government, you saw [the] health department. We’re still going to remain intact to combat this issue in our community.”

Among efforts in the Winchester area, ASAP – or the Agency for Substance Abuse Policy – has worked to educate others about the use and proper application of Narcan, an opioid overdose reversal drug.

John Lennon is chair of the ASAP Board of Clark County and Youth Services Director at George Rogers Clark High School.

“We get money from the state through [a] grant, and we’re trying to do as many things [as possible] to get rid of alcohol and drug abuse,” Lennon said. “Not only does it affect the youth directly, but more we see is [how] they’re affected by what their parents are going through. That’s really where it hits us.”

The mayor’s and judge-executive’s offices can be contacted to find places where help is available.

“The best thing that people could do is get interested and curious and reach out and see what we’re trying to do in this community because it uplifts the whole community,” Branham said.

While acknowledging that there’s always more that can be done, Kibbey spoke positively about the area’s efforts thus far.

“Our community has come a long way. We’ve got a long way to go, but we’re making strides”, Kibbey said. “I’m very proud of what Clark County has done.”