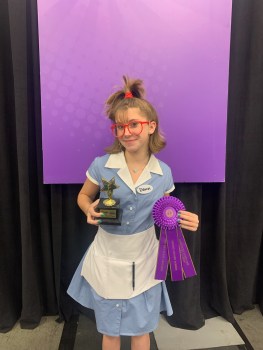 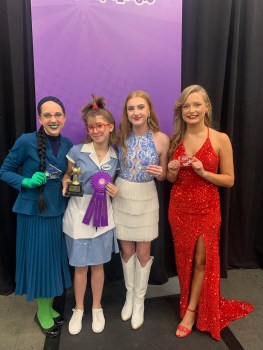 “It really caught me off my feet. I was hyperventilating like crazy. I couldn’t believe it,” said Owen, a George Rogers Clark High School sophomore.

Her grand championship performance was a rendition of “When He Sees Me” from the musical “Waitress.”

“It’s more of a comedy act,” Owen explained. “I had this little country twang accent, and I was talking about love.”

“Ninety-five percent” of the act was based on Owen’s personality.

She described herself as “crazy, witty, and goofy.”

Owen is no stranger to how tough the competition is. She came in fourth-place sweepstakes last year.

And the competition this year was no picnic.

“All the contestants were so good. There were these two girls who sang opera, and I was like, ‘Oh my goodness. How am I supposed to compete with that?’” Owen said.

This year she said she made sure that her act incorporated her vocal range and comedic skills.

Her teacher, Erika Gaines, is one of the reasons she believes she took home the grand champion’s ribbon.

“She really nails down on what she is doing. She gets nit-picky, and it helps so much,” Owen said. “She incorporates yourself. If you have an idea, she never turns you down.”

Owen is Gaines’s third grand champion in 22 years as a vocal coach. Gaines had back-to-back grand champion ribbon winners in 2015 and 2016, Gillian Stith and Antonia Coyles.

Seeing another student triumph is something that Gaines does not take for granted.

“It is so hard to win this competition. I am so excited about this,” Gaines said.

Owen and Gaines have worked together for four years.

And after seeing her student earn a top-five finish last year, Gaines wanted to ensure that the judges saw what a remarkable young woman Owen is.

“When choosing a song this year for her for the state competition, I wanted to pick something that was really going to highlight who Grace is naturally,” Gaines said. “She has the biggest personality you will ever meet, and I wanted for her to be able to get up on stage and have fun being herself.”

The pair worked on the act for over six months, and all the hard work paid off. Not only did Owen win the entire thing, but she also received a perfect score in the semifinal round – which were held on August 20th and 21st. She repeated the feat in the finals.

“She really went above and beyond,” Gaines said about Owen’s dedication. “She really trusted me as her teacher. I think that made a big difference. Anything I needed her to do for that week, she applied it.”

Gaines had three other students qualify for the finals: Emily DeBord, Ella Howton, and Mallory Jones.

To qualify for the semifinals, a contestant has to place in the top three at a Kentucky Fair Board-certified preliminary round held at the local level. Contestants can attempt to qualify at any preliminary location if the site has an open competition policy.

Contestants again have to place in the top three during the semifinal sessions in Louisville to move on to the final round. From there, the top 20 contestants are narrowed down to the top five before a winner is announced.

DeBord, Howton, and Jones all came in third place during their semifinal session.

And though none of them placed in the top five, it is an experience that none will forget.

“It was such a roller coaster of emotion,” said Mallory Jones, a 15-year-old sophomore at GRC. “There were all sorts of different acts … It was a fun experience.”