43rd Pioneer Festival draws a crowd despite some rainy weather 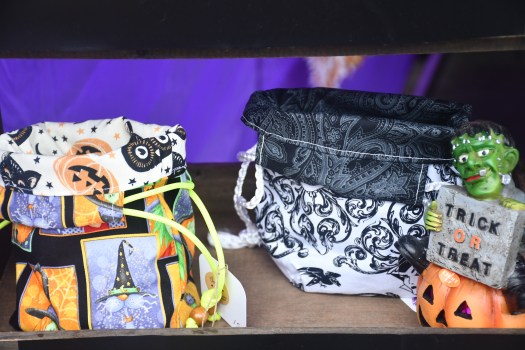 The festival started as a way for crafters to show off and sell their products. Crafts are still a significant draw of the festival - especially with the spooky season around the corner. (Photo by Warren Taylor) 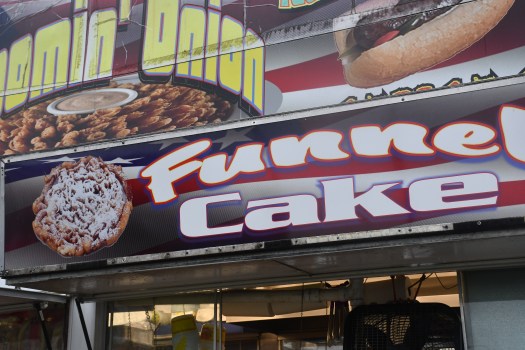 There were plenty of food stands to get a funnel cake or other favorite festival foods. (Photo by Warren Taylor) 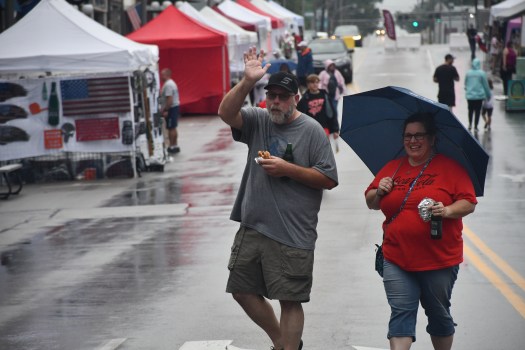 Even on a rainy Saturday the small town friendliness of Winchester was on full display as the Daniel Boone Pioneer Festival returned for its 43rd year. (Photo by Warren Taylor) 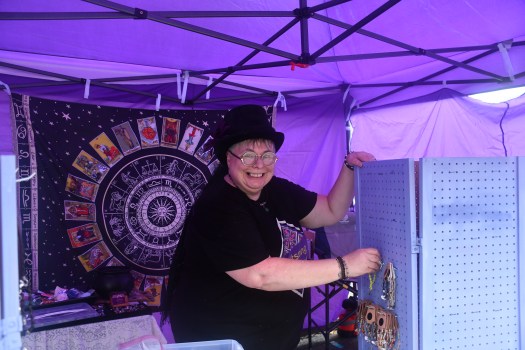 Kimberlee Batchelor was one of several vendors ready to brave the rainy weather to show off their wares. Batchelor operated the Quiltsong booth, which sold handmade jewelry and quilts. (Photo by Warren Taylor) 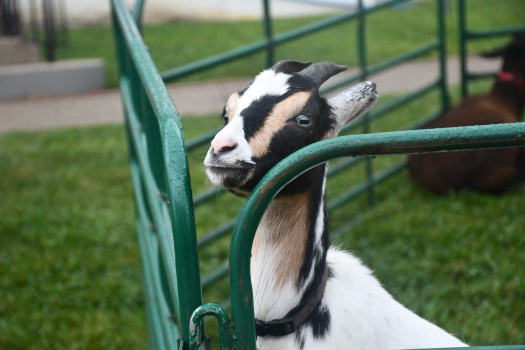 Some festival-goers were not thrilled about the rainy weather. (Photo by Warren Taylor) 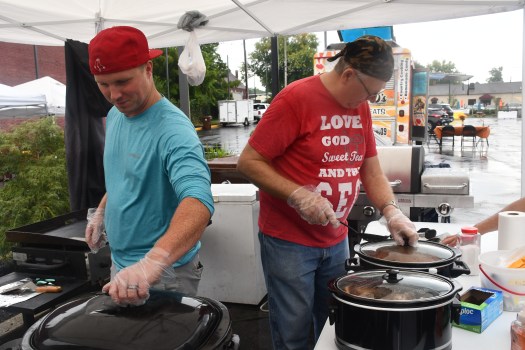 When rain sent people ducking for cover, Celebrate Recovery's tent, where they served up tasty country ham sandwiches, was a favored refuge. (Photo by Warren Taylor) 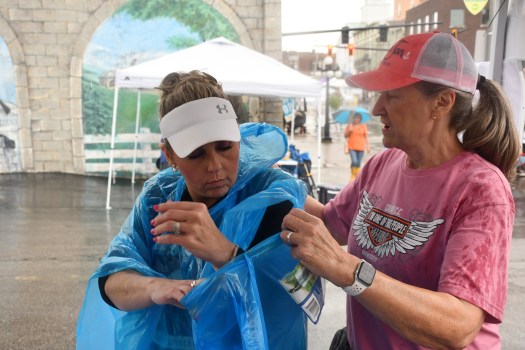 Ponchos and umbrellas were the official uniforms of a soggy Saturday for the folks who wanted to get their festival fix. (Photo by Warren Taylor) 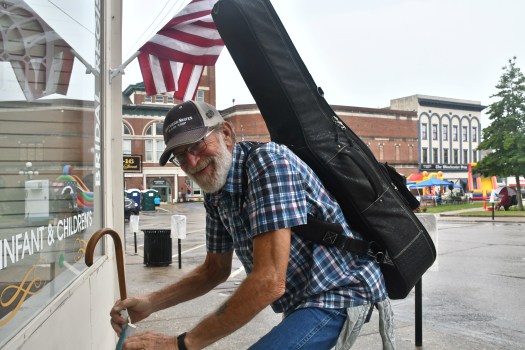 Musicians like Buck Winburn came to the festival to provide entertainment. Winburn has played at the festival for years and likes to play folk music to connect people to Kentucky's rich musical heritage. (Photo by Warren Taylor) 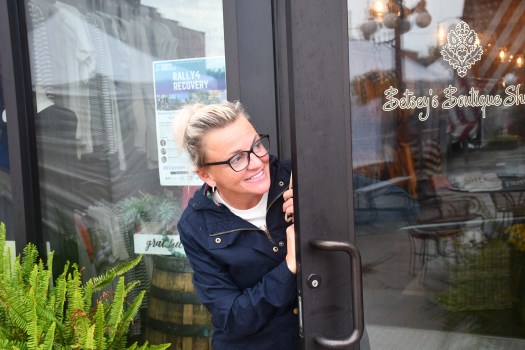 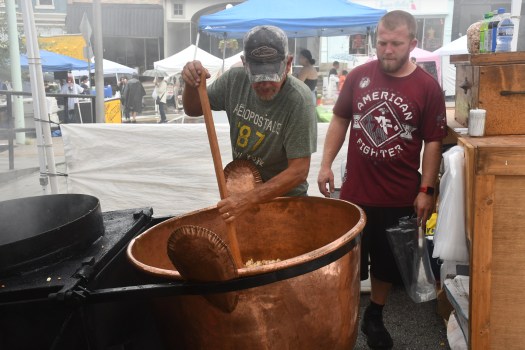 A bag of hot kettle korn was a perfect snack to sample while wandering down Main Street's main strip of festival activity. (Photo by Warren Taylor) 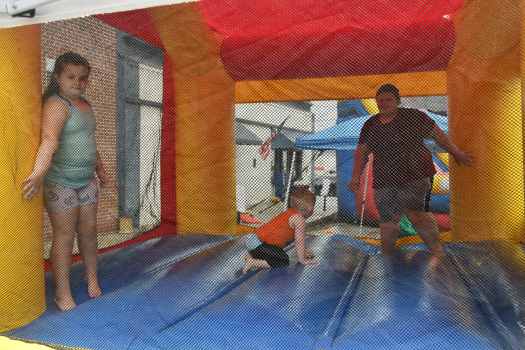 The children's activity center behind the Clark County Courthouse featured a petting zoo and inflatables. (Photo by Warren Taylor)

Come rain or sunshine – and there was plenty of rain on Saturday – the 43rd annual Daniel Boone Pioneer Festival drew a crowd to downtown Winchester this weekend.

The two-day festival started early Saturday with the George Rogers Clark Track and Cross Country Daniel Boone 5K. Craft and food vendors opened for business at 9 a.m. and closed at 6 p.m. Starting at 7 p.m., a street dance was held in front of the Clark County Courthouse. The headlining acts were The Classics and Prime Cut.

Sunday kicked off with a community church service at the courthouse and another day of crafts, food, and music in the city center.

The festival drew attendees from all over the area and some from out of state.

Jonathan Carron and his family were in Kentucky for the weekend from their home in Indiana for a family reunion. Saturday was his first time attending the festival, and he came away impressed.

“I love it. There are nice people down here,” said Carron.

He joked that he and his family “were thinking about moving down here” due to the manners they encountered from the locals.

“Everybody says ‘Excuse me’ and are very respectful. Where I live, if you bump into somebody, they might bite your arm off,” Carron said with a laugh.

Many Clark County residents have been coming to the festival for decades.

Kathy and Terry Stafford have lived in Winchester for over 30 years and have attended numerous Pioneer Festivals, but the last one they attended was at College Park. Saturday was the first time year they attended since the festival moved back downtown.

“I think it is a great opportunity for it to grow. There are a lot more vendors,” said Kathy Stafford about the festival’s move.

Terry Stafford fondly recalled “spending time with the kids” at previous festivals and that even with the rainy weather, it was good to “get out and have something to do.”

“This gives us an opportunity for us to get out and see people and see the community,” Kathy Stafford said.

Winchester resident Felicia Oesterling also made a return trip to the festival on Saturday. She was nostalgic for the days when the festival was at the park.

“I liked it when it was back at College Park because it was more family-friendly than walking up and down a road,” said Oesterling.

She said that she did like how there was a children’s activity area now and that she got to sample her favorite festival food.

“Deep-fried Oreos and funnel cakes,” Oesterling said when asked what her favorites are. “They taste really good … I have attempted to make them on my own, and they are not the same.”

And as Oesterling said, there was plenty for the kids to do as well.

On the back side of the courthouse was a petting zoo. There were also inflatables and airbrush tattoos provided by Lex Bounce.

Adam Davis, the owner of Lex Bounce, wanted to ensure that the younger children could have a memorable experience in their town.

“I want these kids to be able to experience things they may not have gotten to experience without having to go to Lexington …They can come to things that the city puts on and get the experience they might get in a bigger city,” said Davis.

And providing them with special memories is what Davis said his business is all about.

“Walking around and seeing booths and stuff for sale does not do much for kids. They like the petting zoo. They like the inflatables. They like face painting. That is what makes memories for them,” Davis said.

The festival started downtown as a way for craft vendors to show off their products, and craft booths are still a draw all these years later.

Kimberlee Batchelor, the owner of Quiltsong, was in town for the festival with a plethora of unique items for sale.

“I started 25 years ago and wanted to quit smoking. So what I did was I started making bracelets because it is something that I like doing, and then I started selling them,” said Batchelor.

Eventually, Batchelor started making and selling leather and rope jewelry, quilts, and her version of bags of holding from Dungeons and Dragons.

“I used to play D&D when I went to college and remembered the bags of holding. So I designed a little drawstring bag for D&D people to put their dice in,” Batchelor said.

Calling herself a “mad hatter,” Batchelor said she loves to entertain the people that come to her booth with her “witchy” personality.

For some local organizations, the festival presented a time to do a fundraiser such as Celebrate Recovery.

“Celebrate Recovery is an umbrella for a lot of different hurts and hang-ups,” said the organization’s regional director, Dickie Everman. “It can be for drugs and alcohol … But today there are all kinds of struggles: anger, control issues, and anxiety.”

The fundraiser’s goal was to raise money to help start other chapters of the organization. To do so, the organization sold country ham sandwiches with the secret recipe perfected by a local chapter of the Lion’s Club.

“We can’t quite divulge the recipe,” Everman said with a smile.

And no matter what their reason for coming, those that went to the festival hopefully left with memories to sustain them until the 44th version.