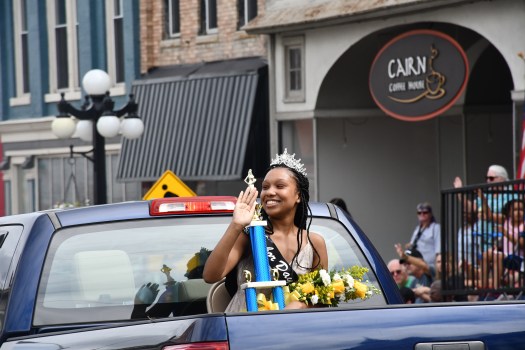 The 2022 Labor Day Parade Queen Aaliyah Parker waves to the crowd in downtown Winchester on Monday. (Photo by Warren Taylor) 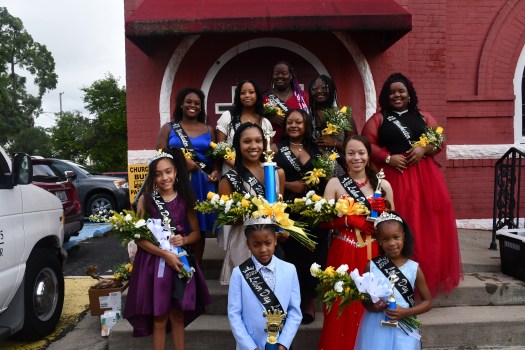 Parker is the daughter of Brittany Berry and was runner-up to the 2021 queen, Tewana Nance.

So why did Parker want to become Labor Day royalty?

“It helps build confidence, and it is fun,” said Parker about why she applied to be queen.

Taking home the crown and $500 scholarship was an honor for her.

“I’m excited,” Parker said. “It means a lot. The scholarship is going to help, and it helped me build my confidence. I did this last year and did not win.”

Parker said her future plans are to become a traveling neonatal nurse.

Winchester Labor Day Committee members emphasized to the girls that the process was more about sisterhood and not a competition.

Parker agreed with that sentiment.

“It’s good to do everything with your girls and your friends,” Parker said.

The seven young ladies vying for the crown spent a lot of time together during the weekend.

“First, we went and built the float, which was fun because we built it together,” Parker said. “Then they had a glow party and a lot of other events.”

The candidates also spent time together filling out their information sheets and learning more about one another.

And even though she did not know all of them before the weekend, Parker had this to say about her fellow candidates.

“All of these girls are my friends and family,” she said.

“We had some very talented, strong, and intelligent young women. I am so proud of each and every one of them. They are amazing, and I can’t wait to see the things that they are going to do for the city and the world,” said Smith.

The judges reviewed the girls’ essays and also interviewed them.

“We spoke to them as if they were our sisters and our friends, not contestants,” Smith said.

Michelle Brooks, a committee member, explained the criteria to be selected as queen.

“They have to write an essay and have a grade point average of 3.5. They have to have a great attitude, great poise, and a great appearance. They also have to want to give back to the community as well,” said Brooks.

She also explained what made an ideal candidate.

“They need to be passionate about things and want to be educated. They also need to want to do things for the community,” Brooks said.

And at its heart, becoming the Labor Day Queen is all about representing the entire area.

“It means that you are representing your community and also Clark County. You want to show great attitude, great poise, and great spirit,” Brooks said.

This year’s runner-up was Jacqueline Anderson.