4th Annual Pig Pickin’ for the Past is Saturday 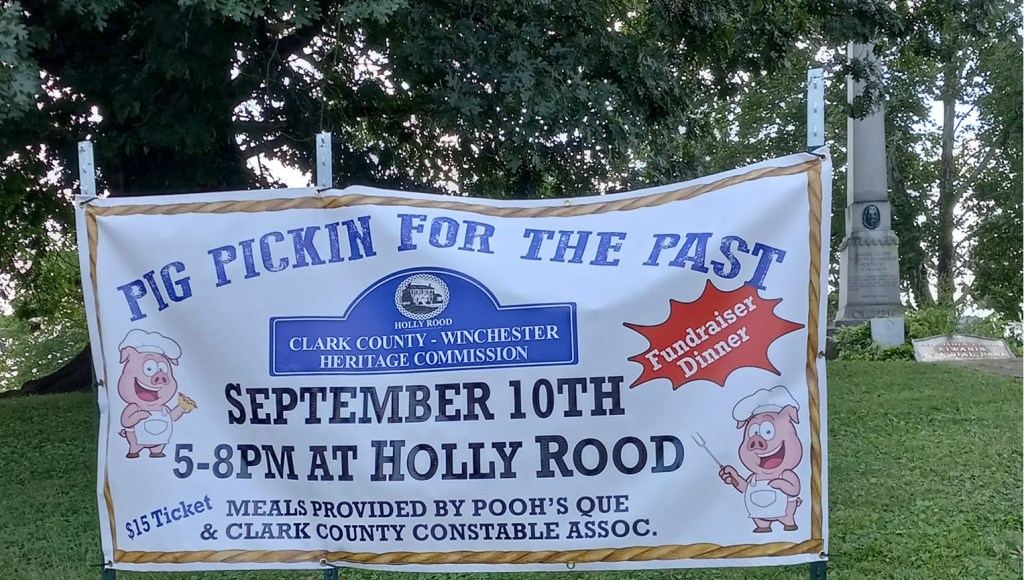 The 4th' Annual Pig Pickin' will be this Saturday at Holly Rood on Beckner Street. (Submitted photo)

Just one week after the Pioneer Festival, it may be tempting to think that not much will take place in Winchester over the upcoming weekend.

However, such thinking would be faulty.

On Saturday, Sept. 10, from 5 pm. to 8 p.m. at Holly Rood, the 4th Annual Pig Pickin’ for the Past Fundraiser Dinner will take place. The location is 28 Beckner Street.

The Clark County-Winchester Heritage Commission has put together the event. Tickets for adults are $15, while youth under ten years of age can enter for $5. In case of inclement weather, the event will move to the gym at the nearby Clark County Preschool.

Pooh’s Que and the Clark County Constables Association will be among those offering some delicious food that has previously included barbecue, potato salad, baked beans, chips, dessert, and more.

Trish Torline will provide musical entertainment for the evening.

However, food, drink, and songs are far from the only delectable items offered through the event.

A silent auction sponsored by ACA Pharmacy, Peoples Exchange Bank, and others will be held.

At the silent auction, Twice Blessed – a continuation of the thrift store and food bank formerly Second Blessings – will offer a grandfather clock priced at around $475.

Pampered Chef will also be present with items, including a basket valued at approximately $275.

Additional products include various gift cards from organizations such as Whiskey and Wiles Photography.

And the younger generation won’t feel left out.

“One of the things that’s a little different this year is Howard’s Overhead Door provides us with a kids excavator toy,” Justice said. “There’s a number of items. I could go on and on.”

The auction will include items for history lovers as well.

Four tickets will be given away to witness the Battle of Perryville reenactment.

In what is considered the largest and last major Civil War battle in Kentucky, the action at Perryville took place in modern-day Boyle County. It ultimately resulted in the commonwealth being under federal control for the duration of the war.

“We’re also going to give away a print [map] of the actual battlefield itself,” Justice said.

Thanks partly to funds received previously, the Clark County-Winchester Heritage Commission has served the community.

One way they’ve done so is by sponsoring a student with a scholarship out of Bluegrass Community and Technical College.

“[It is] one thing that I’m very proud of,” Justice said.

The Clark County-Winchester Heritage Commission was initially created to support Holly Rood in the 1970s.

Holly Rood, sometimes known as the Clark Mansion, was built between 1813-1814 as a home for Governor James Clark. It was almost torn down 50 years ago to build a bus garage but has since been saved and restored.

The mansion is currently listed on the National Register of Historic Places.

Some parts of the mansion that need improvement  are the gutter system and an area underneath the floor.

“He was, I think, the only governor that actually represented the legislative, judicial, and executive branches,” he said. “He’s a pretty neat man. I don’t know how he did it all.”