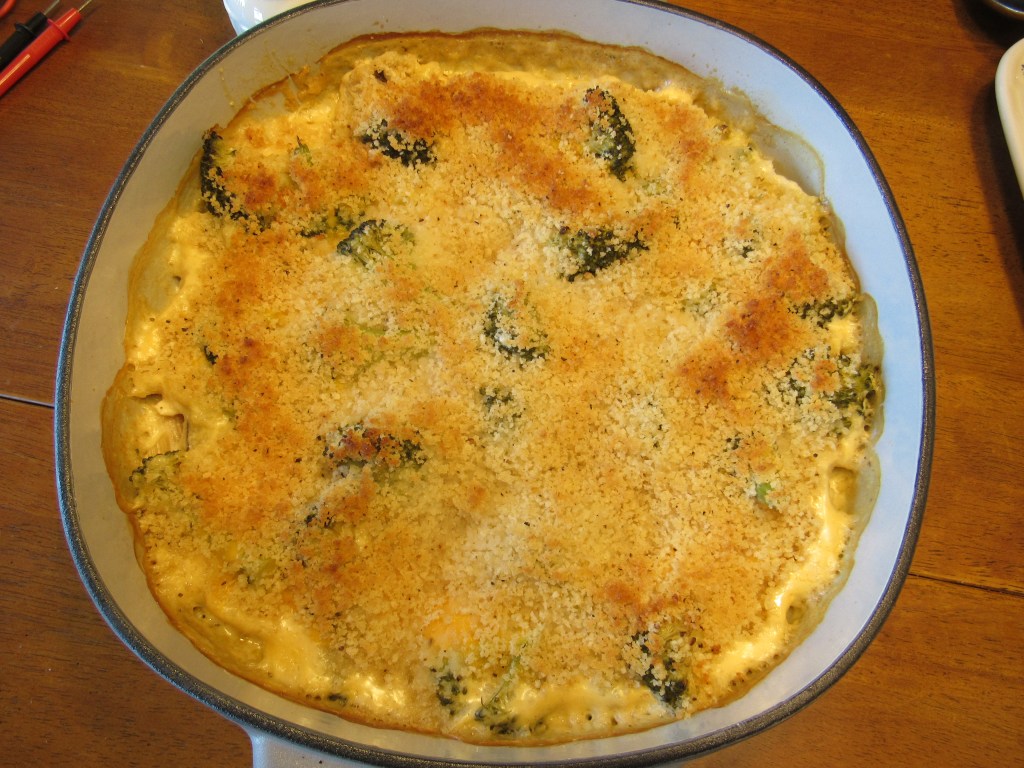 Sarah Condley chalks up the Chicken Divan recipe in the "Nailed It" category. (Photo by Sarah Condley)

Several months ago, I attended a Pampered Chef party, and one of the highlighted dishes was Chicken Divan. By now, you may know I don’t really like cheese, and I don’t like condiments (mayonnaise), so I was very skeptical of this dish, but I did give it a taste, and to my surprise, I thought it was pretty good – despite the cheese and mayo.

At the party, I received a copy of the recipe, and I tucked it away when I got home. I pulled the recipe out the other day when I wanted to prepare something fairly quick for supper, and since it’s a one-pot meal, I wasn’t going to make a wreck of the kitchen preparing it.

I gathered the ingredients and got started. Lisa, the Pampered Chef consultant, had halved the recipe for the get-together, and I did the same. Typically you’ll make this dish in a 9 x 13 baking dish. I made it in something equal to about a 12-inch oven-proof skillet.

I turned on the oven to preheat, and while that was happening, I combined the wet ingredients and the spices. Next, I just poured in a little less than half the amount of pasta called for in the recipe (Brad and I like more meat and less pasta in most dishes). And yes, you use dry pasta – not cooked pasta. I put the raw, yes raw, chicken breast pieces on top of the pasta, added the broccoli layer to the dish, and then topped everything off with the grated cheddar cheese (don’t mix these ingredients). Then pour the liquid/spice mixture over the top. I placed a lid on the baking dish. You can cover it with foil if you want and put it in the oven for 25 minutes.

While the casserole was baking, I put the breadcrumb topping together. Since I like a lot of crunch, I didn’t do half this part of the recipe. I used the entire amount. I didn’t have the Pampered Chef Lemon Pepper Rub, so I substituted lemon pepper seasoning, which was in my spice drawer.

Supper was on the table, and the kitchen wasn’t a total mess. Brad and I sat down to eat, and after a prayer thanking God for the food and other things too numerous to mention (God is so good to us), we began to eat.

Again, I was pleasantly surprised at how much I liked this dish. I really could not taste the mayo, and since I’d lightly sprinkled one section of the dish with cheese, it wasn’t bad either. Brad said he liked this meal and said the next time I make it. He would like shiitake mushrooms added – Noted. We got our fill, and there was still lots of Chicken Divan left over for another meal.

We will chock this recipe up to being a “Nailed It,” and I’ve added it to my self-made cookbook.

• Preheat the oven to 425 degrees.  Whisk together the broth, sour cream, mayonnaise, milk, lemon juice, garlic, and paprika in a large bowl.

• Add the pasta, chicken, broccoli, and 1 cup of the cheese to a 9 x 13 baking dish in the order listed.  Pour the sour cream mixture over the top.  Cover with foil and bake for 25 minutes.  Combine the breadcrumbs, butter, and rub; set aside.

• Remove the pan from the oven and uncover.  Sprinkle the remaining cheese and the breadcrumb mixture over the top.  Bake, uncovered, until the pasta is al dente, about 15 minutes.  Let it stand for 10 minutes before serving.