Pig Pickin’ for the Past raises funds, honors historic preservation 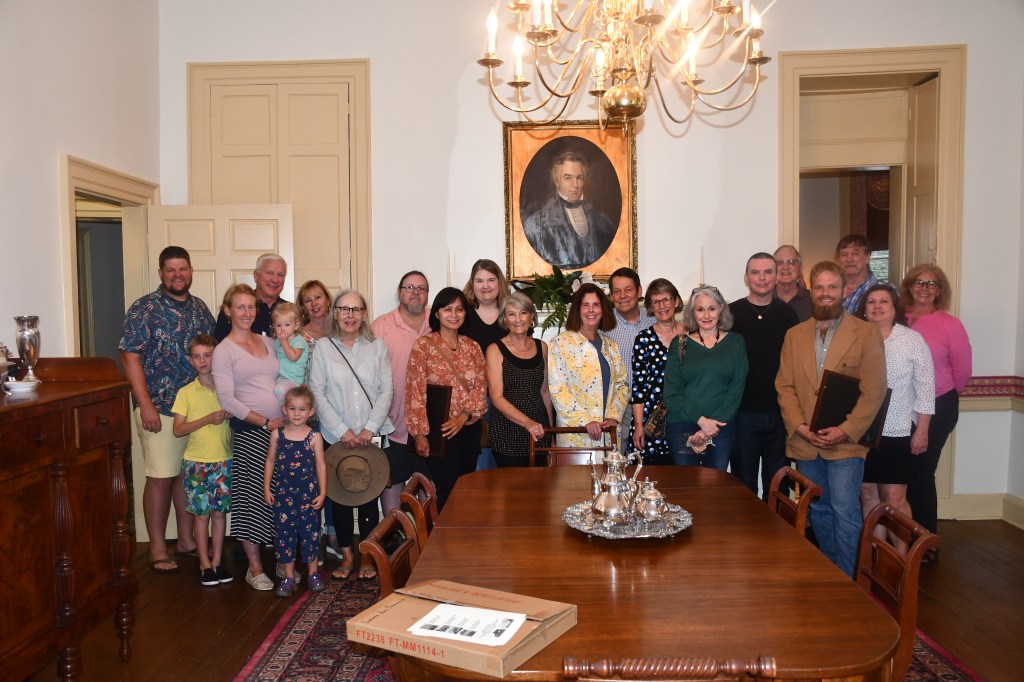 The Clark County-Winchester Heritage Commission honored those in the community who showcased excellence in historical restoration on Saturday evening. (Photo by Warren Taylor)

Saturday evening was for barbecue and history in Clark County.

The Clark County-Winchester Heritage Commission hosted its 4th Annual Pig Pickin’ for the Past to raise funds for and honor historic preservation in the area on the lawn of Holly Rood.

The event featured music by Trish Torline, a barbecue dinner provided by Pooh’s Que and the Clark County Constable Association, and a silent auction.

Paula Branham Thomas is a commission member and explained the event’s history.

“They were wanting something to make money to put toward historical items in the county and also to help restore Holly Rood,” Thomas said.

The first event in 2019 was a success, but then the Covid-19 pandemic happened, and having a large gathering of people at a dinner was out of the question.

But the commission did not want to throw in the towel on the fundraiser.

“We did drive-thru dinners,” Thomas said. “We all wore our masks and gloves, and the event was a success.”

The event’s primary concern is raising funds for the preservation of Holly Rood.

The mansion was built in 1814 and served as the residence of Kentucky’s 13th Governor, James Clark. Before his death during his term as governor in 1839, Clark served in the Kentucky House of Representatives, the United States Congress, and as a judge in the commonwealth’s courts, making him one of the rare politicians to serve in all three branches of government.

Holly Rood has been on the National Register of Historic Places since 1974 when it was saved by the commission’s original members from being torn down and turned into a bus garage.

“We rent it out for weddings, teas – they have beautiful teas out here -, and for fundraising dinners,” Thomas said.

In addition to preserving the mansion, the commission helps put up signs commemorating local history and promotes preservation efforts.

The event also featured the first historic preservation awards given since 2019.

The commission’s reason for giving out the 17 awards is simple.

“If we don’t keep our history and that architecture, it will be gone forever as soon as you tear it down,” said commission member Steve Justice.

“I’m ninth generation,” Freeman said about her deep Clark County roots. “It means everything to me to build the local economy.”

Freeman said that as the climate crisis continues, it will be necessary to reestablish local supply chains.

“We are going to need local food and local everything. No more supply chains from China,” she said.

Commission members also have varied reasons for why there is such an urgent spirit in the area to preserve history.

“It’s important to know and remember what the people before you accomplished and their struggles to get us to this point in time. To remember and build on what they began shows respect to them and helps us to know where we came from!” Thomas said.

Justice said it has to do with the number of lifelong residents in the area.

“There are a lot of people who have spent their life in Winchester and Clark County,” he said. “They have seen all these buildings when they were young and watched them as they have grown older.”