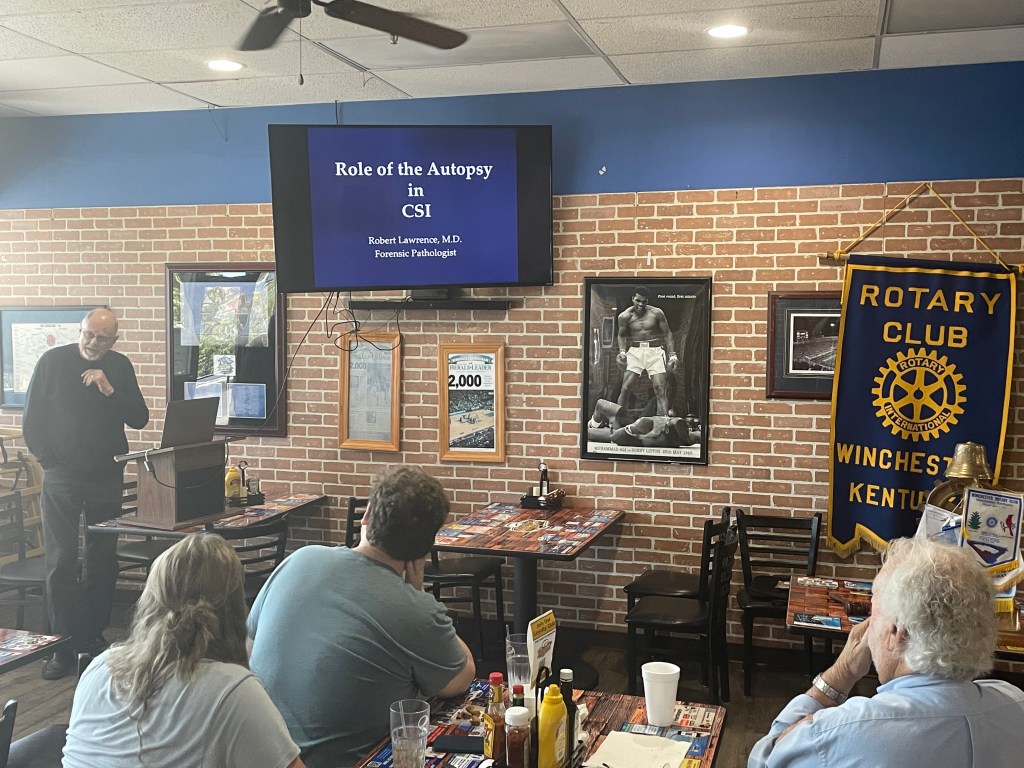 When looking at the lineup of individuals given time to speak at Winchester-Clark County Rotary Club meetings on Fridays, individuals from Stockton, California, seldom come to mind.

However, Dr. Robert Lawrence – who lives with his wife in Paris three months a year and in the Golden State nine months a year –  was in town to discuss the role an autopsy plays in crime scene investigations before the club last week. It is an interest that has guided him as a forensic and hospital pathology leader.

Lawrence spent a section of his speech defining terms for better understanding, such as manner of death and cause of death.

“Cause of death is like a heart attack or a gunshot wound,” said Lawrence. “Manner of death – that is natural or unnatural.”

The three types of unnatural death would be an accident, homicide, or suicide.

Using pictures from autopsies taken through the years, Lawrence pointed out how the cause of death was determined in various cases, including drug overdose, drowning, cardiac arrhythmia, blunt force trauma, and more.

He also discussed artifacts, defined by Lawrence as “something that happened after [death] changing the appearance and providing notice.”

An example of an artifact would be bites from bugs on a body that, to the untrained eye, might suggest something else had occurred.

Thus, it takes a keen eye to perform the job accurately.

In Dr. Lawrence’s words, objectivity, curiosity, and persistence are the three most essential characteristics of being a strong pathologist.

“If things don’t add up, you’ve got to go back and get more information,” he said. “Talk to the police, have them do more investigation. Do another test [or] something like that until everything makes sense and adds up.”

Asked about one of the unseen parts of the job, Lawrence pointed out that forensic pathologists are often called upon to act as experts in court.

Though some may feel intimidated, Lawrence insists it’s his favorite part.

“You get to tell the jury what did happen and what did not happen, and sometimes the attorneys want to focus on what they would like the jury to think happened and vice versa,” he said. “It’s always fun to talk to the jury and see that they understand what I’m saying by the time I leave. They know what the truth of what really went on is.”

Yet the general interest of the public keeps him continuing to educate others.

“This information is something we’re all interested in because we all are eventually going to die, and we all have friends who die,” he said. “I’ve never found anybody that didn’t like to hear presentations in this regard.”