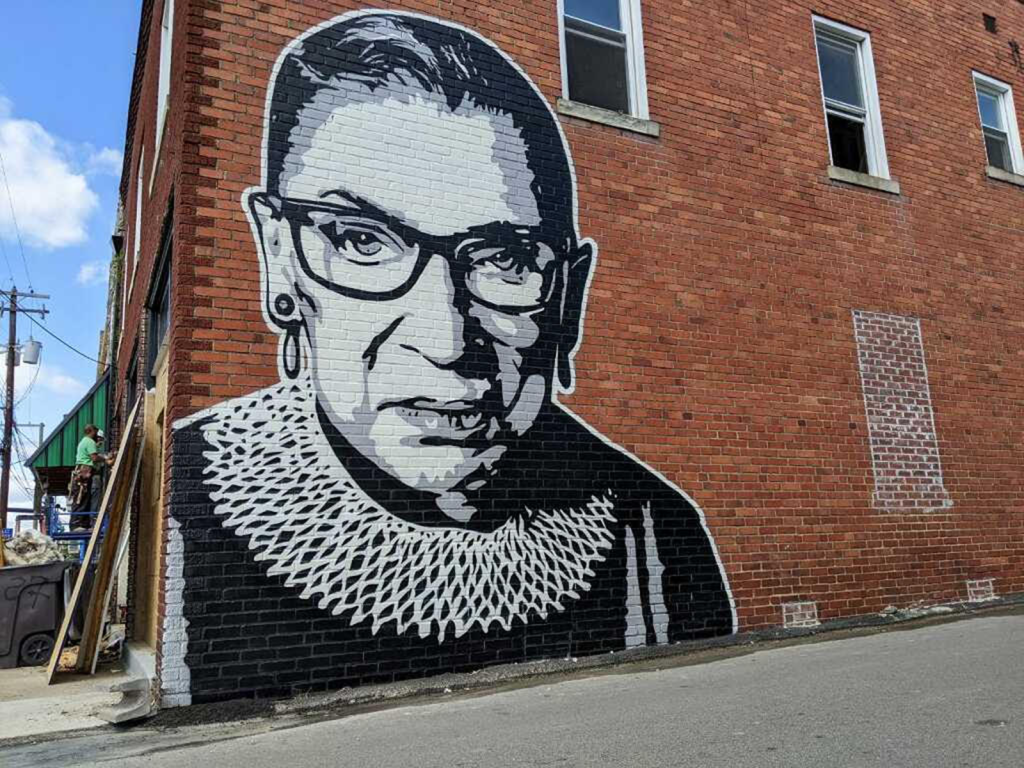 For more than a week, the Ruth Bader Ginsburg mural in downtown Winchester took form on an outside wall of Micki’s Irish Bar. The image appears to be peeking around the corner of Wildcat Willy’s, trying to see what’s going on further down East Broadway, as if asking, is a train blocking the street yet again?

The mural is the work of Graham Allen and Geoff Murphy, collectively known as Square Pegs Studio and Design, from Lexington. This past Saturday, Murphy was painting, and Allen was “supervising.” However, both men share painting duties as well as design responsibilities. Allen is a graphic designer. Murphy designs and installs vinyl windows and vehicle wraps.

Ruth Bader Ginsburg (1933- 2020) was a United State Supreme Court Justice from 1993 – 2020. According to Allen, RBG was included in their series of murals around central Kentucky simply because of her advocacy on behalf of “equal rights and human rights.”

“So far,” Allen continued, “we’ve had no pushback on the mural. People seem to like it.”

“We hope to have the mural done in time to commemorate her death, September 18,” said Murphy.

Asked what other murals the two have done, Allen Murphy listed off more people than my lack of shorthand could keep up with, including Harry Dean Stanton, John Prine, several area veterans, Dick Van Dyke, Tom T. Hall, and Hunter S. Thompson as part of their Kentucky Inspiration Series. Over the past ten years, Allen and Murphy have completed more than 100 murals in the Kentucky area for local businesses and major corporations.

“The RBG mural is based on an amalgamation of several pictures,” said Allen. “We took an eye from one, a cheek from another, and created our own portrait. Of course, it looks like her. But it doesn’t look like any single picture of her.

When asked who had commissioned the mural, the artists pointed to Adam Kidd, owner of the Micki’s bar building.

Kidd said: “The artists sold me. I really enjoyed their mural series in Lexington. With RBG’s death on September 18, it seemed like a good time to do it. RBG reached the top of her profession. She led the way. A female who made it all the way.”

Kidd mentioned that he wanted to see the mural go up on or near female-owned businesses.

Kidd did say that as part of the mural project, DAM Holdings, and Square Peg was donating “part of the cost of the mural” to the Beacon of Hope, a local women’s shelter not affiliated with any church or other institution. It is a 100% independent center. There were no strings attached to the donation.

Having a building be part of the series was an easy decision for Kidd.

“It was an exciting opportunity to be involved in the Square Peg mural project,” Kidd said