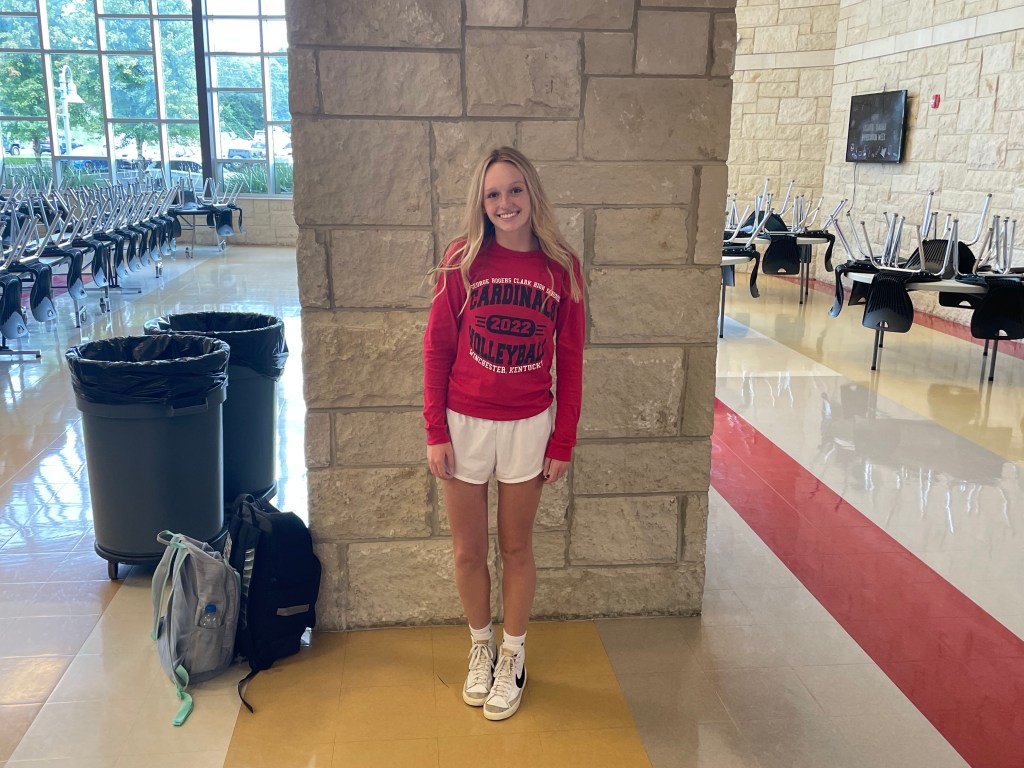 Kelsey McKeehan, a junior for the Lady Cards volleyball team, has helped lead the Cards to a strong start this season. (Photo by Matt Cizek)

Two years after a winless season, the George Rogers Clark High School girls’ volleyball team has taken the 10th Region by storm with a 10-3 record that is good for second-best in the region behind Scott High School.

While several players have stood out, perhaps none have more so than junior Kelsey McKeehan.

McKeehan, a setter and outside hitter, is responsible for 221 of the team’s 283 assists.

“Setting is my asset to the team,” said McKeehan. “I definitely feel like I have a role in communicating to and being captain. You have to have that role and fulfill it well, or else everything falls apart.”

McKeehan has been playing volleyball at the varsity level since the 2020 season when the Lady Cards were in the midst of what would eventually stretch to a 32-match losing streak.

Though unfortunate, it would also be a humbling experience for the junior and teammates – including Zarey Hooton, Abigail Kubican, Kaitlynn Banks, Alissa Pasley, and Jordan Thompson – who have continued playing at a high level for the Lady Cards.

“We were really hard on ourselves for losing, but we used it as momentum and a drive to want to win that next game that we play,” McKeehan said. “Defense-wise, we’ve really improved, and [offensively] as well. We’ve been getting out of service quick. It’s really been a lot cleaner than previous years.”

Outside of GRC, McKeehan has continued to develop as a player.

As a sophomore, she also earned All-Region Team Honorable Mention after leading the Lady Cards with aces (61), assists (275), finishing third on the team in blocks (20), and fifth on the team in kills (50).

In addition to the statistics mentioned above, she has accumulated 21 service aces, 71 digs, and 30 kills through the first ten games of this year.

The Lady Cards continue standing out as a team as well.

They rank in the top 50 of the state in multiple categories by being 33rd as a team in kills, 18th in blocks, 43rd in assists, and 32nd in digs.

McKeehan is 45th for sets, while teammate Jordan Thompson is currently 49th in blocks.

According to McKeehan, the results have come from work behind the scenes.

“I feel like we’ve spent so many hours in the gym that … You don’t really talk about”, she said. “We really worked hard to improve this year, and it’s really showing off.”

Coming off a loss to Madison Central, the hard work came to fruition during perhaps their most intense matchup of the season against Bourbon County on September 6th.

In between losing sets by scores of 25-11 and 25-21, the Lady Cards pulled through with tight victories of 25-22 and 25-23 in the first and fourth sets. With the momentum in their favor, they convincingly won the fifth set over the Lady Colonels by a 15-8 score.

“We’re really good at lifting each other up, and it’s just a huge impact on how we bounce back so quickly,” said McKeehan.

Though proud to serve as a team leader and contribute to GRC over the next two years, McKeehan also seems content, knowing that the future of Lady Cards’ volleyball appears to be steady.

“We have younger girls working up to take my place when I graduate,” she said.