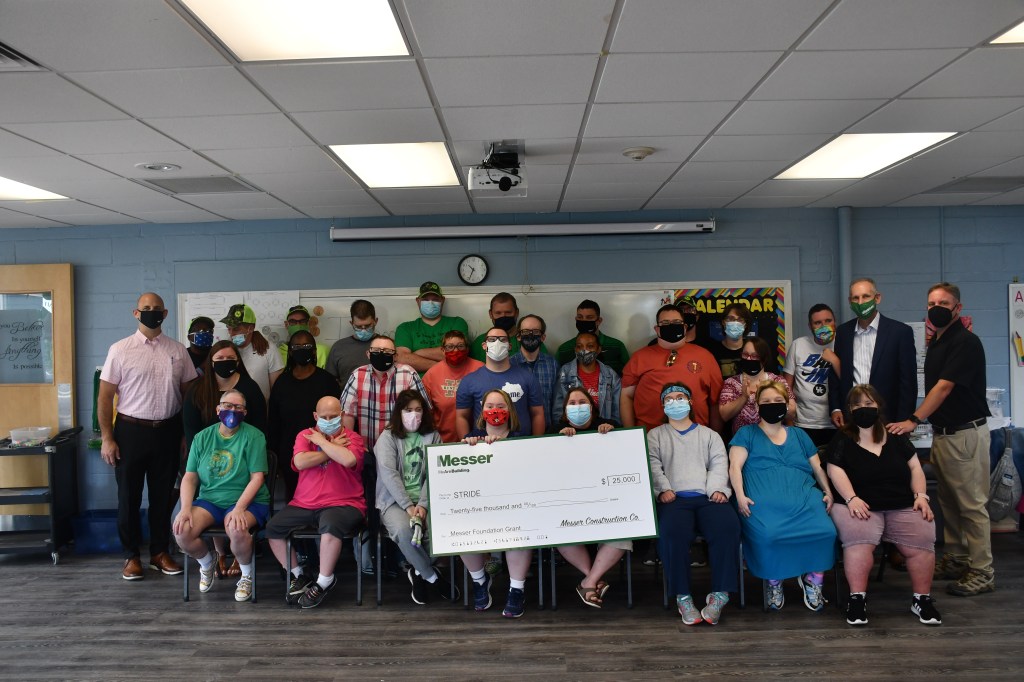 Representatives from Messer Construction presented $25,000 to the STRIDE Program on Friday that will be used to improve the program's Maryland Ave. facility. (Photo by Warren Taylor)

A Winchester non-profit will upgrade its facilities thanks to a grant from a Lexington-based construction company.

The STRIDE Program in Winchester received $25,000 from Messer Construction on Thursday. The grant is specifically given for construction projects.

The non-profit provides life-training skills for children and adults with disabilities, speech and occupational therapy, and athletic teams that compete in the Special Olympics. It also has a Montessori pre-school and aftercare program.

And while it provides terrific programs, the non-profit’s Maryland Ave. location was initially built in the 1920s and has started to show its age, especially the windows.

“The windows are single-paned and not very energy efficient. Some of them leaked. If there is a good rain, we get water in the kitchen,” said Darren Diguette, the executive director of the STRIDE Program.

As a result, the non-profit’s heating and cooling bills can get quite high.

And finding funding specifically for upgrades is a challenge.

“Non-profit directors will tell you it is difficult to find funding to spend on your facility. Most grants are program directed. So to have the opportunity to improve the facility is incredible,” Diguette said.

The grant is one of four that Messer gives out annually to non-profits with construction needs.

Josh Warren, a project executive for Messer, explained the process for qualifying for one of the grants.

“There is a criteria. We receive anywhere from 20 to 50 submissions each year,” Warren said. “We are in ten different regions and receive submissions from each of them. Those are scored and have to fit into the criteria.”

The criteria include non-profit status and needs such as improvements for workforce development, environmental sustainability, or diversity.

“It is a very detailed and some might say tough process to get through,” said Mark Hill, the regional vice president for Messer’s Lexington office.

Messer has a committee that reviews the grant applications and narrows the list to five finalists. After that, a representative of each non-profit comes in for an interview.

The presentation from STRIDE impressed the committee.

“When we looked at the need for the facility – the existing windows were leaking, and the HVAC was not operating efficiently – there was certainly a need,” Warren said. “When Darren came and presented when he left the room, everyone said that STRIDE was the most deserving of what we heard that day.”

Megan Meiner, a craft force education specialist for Messer, has seen the work that STIDE has done firsthand with her nephew, Cade Randle.

“With STRIDE and Cade, it has always been about trying to find genuine friendships and a space where he can be himself. Stride allowed him to do that,” Meiner said.

She said Randle’s family worried about what would happen to him after he graduated from high school, but STRIDE has given him a place to belong.

“He has a group of friends that will be his friends forever,” Meiner said.

Diguette explained that the non-profit likes to spend most of its available funds on its programs.

“Things that will benefit the participant’s lives,” he said.

Thanks to the grant from Messer, the non-profit will be able to continue to do just that.

“Being able to improve the building without it hurting the amount of resources we have to put into the program is such a gift, and we are very thankful for them and look forward to the relationship with them growing,” Diguette said.