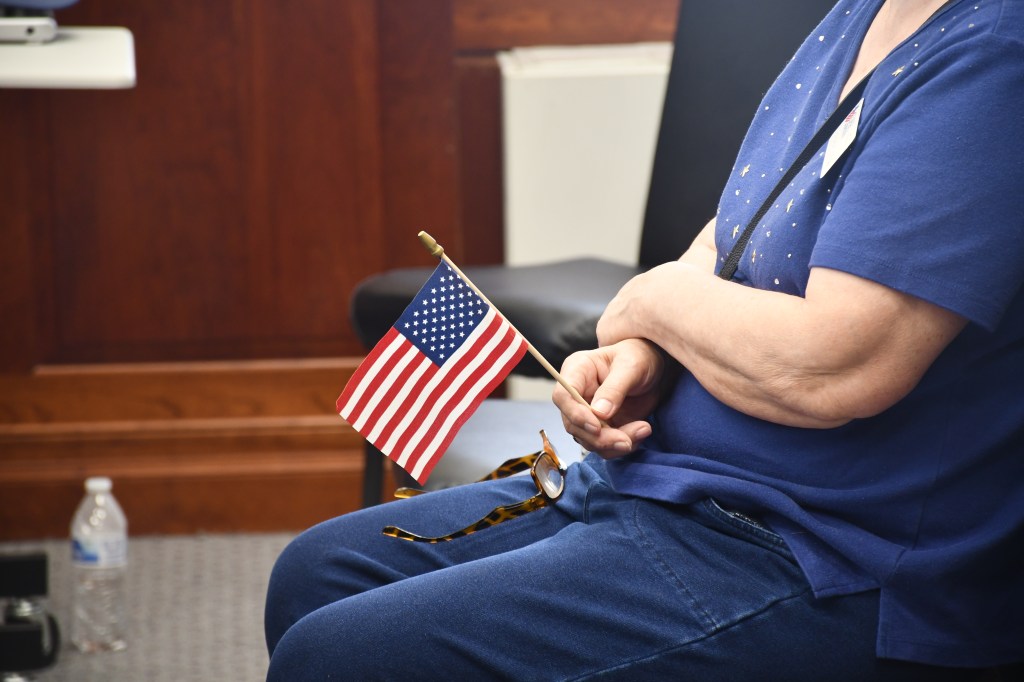 Two hundred and thirty-five years ago, after a heated summer of debate in Philadelphia, the framers of the U.S. Constitution put the finishing touches on the young nation’s governing document. It is said that church bells rang to mark the occasion.

On Monday, Clark County commemorated the anniversary of the federal republic’s birth with a Constitution Day Program in the fiscal courtroom at the Clark County Courthouse. The Hart Chapter of the Daughters of the American Revolution (DAR) organized the program.

Constitution Day – celebrated on Sept. 17 – was started by the DAR in 1955. The day’s observance was codified into law the following year, and it became a federally recognized holiday in 2004.

“The aims of the celebration are to emphasize the citizen’s responsibilities for protecting and defending the Constitution, to inform people that the Constitution is the basis for America’s great heritage and the foundation for our way of life, and to encourage the study of the historical events that led to the framing of the Constitution,” said Branham during the ceremony.

Before Branham’s remarks, the Hart Chapter’s honorary regent, Fara Fox Tyree, served as the emcee. Following the presentation of colors by the Winchester Fire Department, she led the assembled crowd in the Pledge of Allegiance. Then James Cowan sang the national anthem.

Branham and Winchester Mayor Ed Burtner jointly proclaimed the day’s observance in Winchester and Clark County. Before that, Burtner offered remarks on the Bill of Rights and what they mean in 2022.

“People have to believe that they can come to this room with their complaints and that they can come to city hall with their complaints. We guard that right very selfishly,” Burtner said. “Every one of these amendments is critical and important. It has always amazed me that the Founding Fathers could look forward into the future and craft brilliant language that resonates through the ages and be as modern today as it was then.”

Leslie Rogers, an honorary Kentucky, and Hart Chapter regent, spoke next and explained what the Constitution means to the organization and its goals.

“We hold the Constitution as sacred and promote an enlightened public opinion so that all can appreciate it and understand their history. So today we gather to celebrate and reflect on how blessed we are to be citizens of our great nation,” Rogers said.

State Sen. Ralph Alvarado spoke about how the holiday is often overlooked compared to other patriotic holidays.

“It has always been in the shadows of Independence Day even though the Constitution is of even greater significance than the Declaration of Independence,” Alvarado said. “There aren’t any national concerts or celebrations on the 17th. No major parades or long weekends at the beach.”

The senator opined that many Americans take the Constitution for granted today and do not understand the document as much as in the past. He reminded those in attendance of how revolutionary the document was in the 1700s.

“Those freedoms were novel and fairly new. The patriots of the 18th century were fighting against the consequences of big and arbitrary government,” Alvarado said.

To close the program, Kentucky Supreme Court Justice Laurance B. Van Meter read a Wall Street Journal article titled “Happy Constitution Day, if you can keep it,” which served as a reminder of Benjamin Franklin’s reported words that the new form of government was a republic, but only if citizens do their duty and keep it that way.

And by celebrating the document, Clark County did its part to do just that.