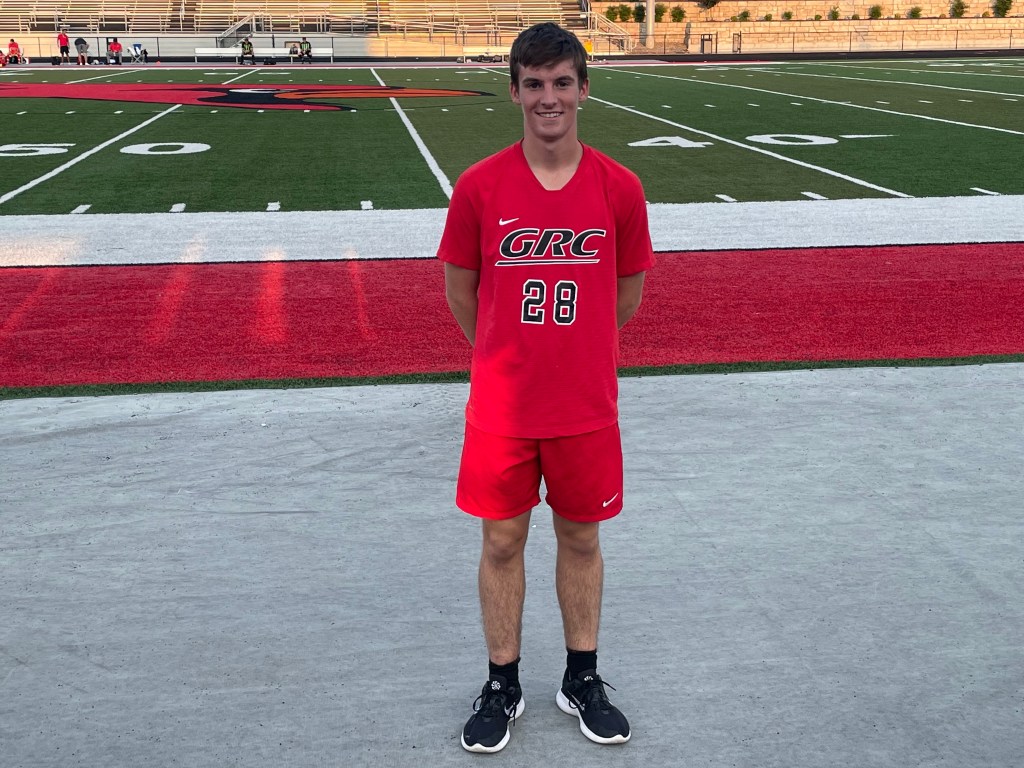 When thinking of dual sport athletes, players like Deion Sanders and Bo Jackson come to mind.

At George Rogers Clark High School, a soccer player gets thought of in the mix.

Clay Turley has had a strong year between the nets and the goalposts as he doubles as a midfielder/striker for the Cards soccer team and the placekicker for the football team.

“I think my strength is just being able to play… Calm under pressure,” said Turley. “I’m not too flustered.”

Turley’s ability to maintain that calm has revealed itself, as his play in close games throughout the soccer season has been vital.

For example, in a 2-1 home victory against rival Montgomery County, Turley contributed a goal that helped make the difference. He also scored twice in a 3-1 win over Scott on August 30th and the team’s lone goal in a 1-1 tie with Greenwood at the Purples Classic Soccer Tournament in Bowling Green.

Most recently, against a Frederick Douglass team that entered the contest ranked in the top 5 across the state, Turley stood out perhaps the most with a pair of goals. Although the presently undefeated Broncos tied the game late, Turley’s efforts helped end the game in a 3-3 tie, only the second time all year that Frederick Douglass had failed to notch a victory.

“Before the game, we were all in the zone [and] ready to play,” Turley said. “We wanted to prove [people] wrong, so we all got in our mindset to play our best and be our strongest. We did pretty well.”

Turley, a junior, previously started his soccer play at a young age.

Joining the Winchester Youth Soccer League, or WYSL, he played with the league until reaching club travel ball – where he played for many years while honing his skills.

Although he didn’t try out for the high school team in his eighth-grade season, Turley made the soccer team as a freshman and has continued to be a solid contributor.

Turley notched nine goals and five assists through the first sixteen games of the year. Four goals came in the last two outings against Frederick Douglass and a 5-0 win over Paris.

The Cards stand with a record of 8-4-5, just behind Bishop Brossart and Montgomery County in the 10th Region Standings.

As mentioned, they defeated the Indians earlier in the year. They fell just short in a 2-1 win against the Mustangs.

“We have a lot of team chemistry this year, which is always great, and that’s been helping us out,” Turley said. “I think both individually and as a team, we have some improvements that we can do, and I can do personally, but overall I think we’re playing well.”

Though soccer may be his main forte, it would be remiss in failing to mention his football accomplishments.

Currently, in his second year as the team’s placekicker, Turley has successfully kicked each extra point, along with his only field goal attempt of the season.

Frequently kicking the ball out of the end zone for a touchback has also helped make life harder for the opposing team’s offense.

“Football has been a very different experience, but it’s been a really outstanding one too,” Turley said.  “[Coach] Vogler has given me a lot of grace with that, too. He’s been awesome.”

Whether running past defenders with hopes to score or kicking off to returners on the gridiron, it looks like Turley’s excellence will be here to stay.