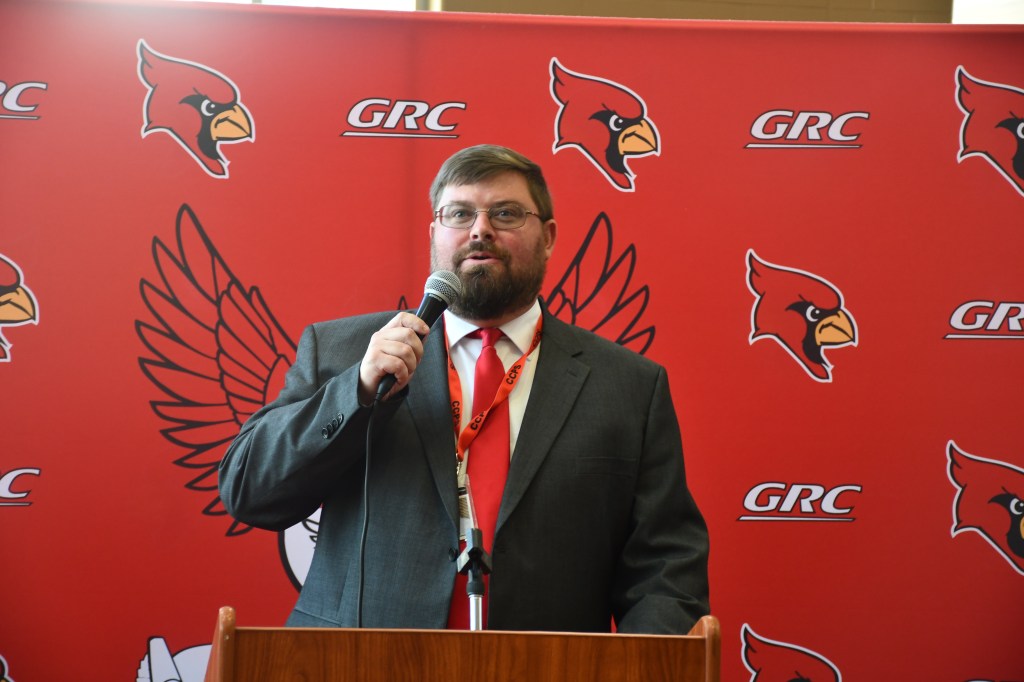 Clark County Public Schools (CCPS) has a new superintendent, and he is a known commodity around the district.

Dustin Howard was announced as the district’s new superintendent at a special-called meeting of the CCPS Board of Education Friday afternoon at George Rogers Clark High School.

He replaces Dr. Molly McComas, who left the district after a mutual parting with the board in late June. Dr. Elmer Thomas has served as interim superintendent since July.

Superintendent Howard is ready to get to work.

“It is hard for me to tone down my excitement because I am pretty fired up about it,” Howard said shortly after his introduction.

And while he is thankful for the enthusiastic response from the community, Howard has his eyes on the district’s long-term future.

“The moment is nice, but moments fade. I am looking forward to the journey and the work with our community,” he said.

A native of Raceland in Greenup County, Howard was active in school from an early age.

“I played football, baseball, and basketball. I was on the academic team. Raceland is a small school, and that means if you are involved, you are involved in a lot of things,” Howard said.

While he was not always sure he wanted to be an educator, Howard said that he knew he wanted to “work with people” and decided on a career in education late in his college career.

He studied psychology at Centre College in Danville and credits it with giving him a leg up with his work in education.

“I think that studying groups, studying people, and studying structures has really helped in education because of the dynamics of things and how you set up scenarios to have people be successful,” Howard said.

Howard has spent most of his career in CCPS.

In 2003, he was hired as a school psychologist for GRC. Next, he was a special education facilitator and then served for two years as the principal of the Phoenix Academy.

“We were identified as a top-ten alternative program in the state of Kentucky,” Howard said. “In two years, we transformed a lot with programming and structures.”

After his stint at the Phoenix Academy, Howard was hired as the principal at Robert D. Campbell Junior High School, which was undergoing a difficult transition due to the consolidation of the existing district middle schools.

The process was a challenge.

“There was a lot of hard work and tough conversation. There was a lot of really digging down and figuring what we were going to be about trying to blend two different mindsets and cultures,” Howard recalled about the experience.

He feels the board has handed him an excellent opportunity because of the abundance of resources in CCPS.

“I feel blessed and honored to be given the opportunity to lead our district forward. We have got great people in our community and great students. We have got great facilities and great teachers. We are on the precipice of something fantastic for a long time to come,” Howard said.

The board feels they are just as blessed to have Howard.

“Mr. Dustin Howard has proven to be a great leader throughout his tenure with CCPS. His leadership skills are perfectly aligned with the needs of our district. His vision for CCPS and our community will take us to the next level,” said the board’s chair, Megan Hendricks.

Board member Ashley Ritchie served on the screening committee during the search for the new superintendent and lauded Howard’s personality and love for the area.

“Knowing Dustin, he is a big community supporter. He is a healer. He likes to heal things, and he likes to fix things,” Ritchie said.

Familiarity with the area was a big draw to Howard’s candidacy for board member Bill Taulbee.

“He is from here, and he knows the environment,” Taulbee said. “He is very humble. I think he will put people around him who will make a difference in the district.”