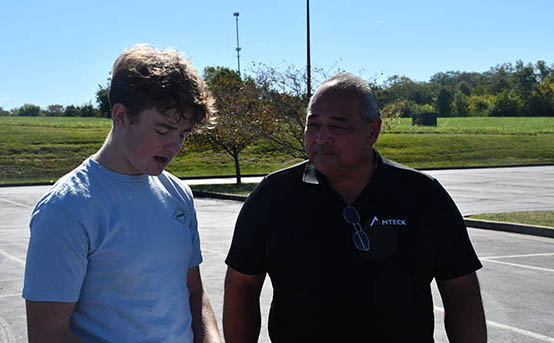 Jon Dougherty - seen on the right - said it is vital for Amtek to connect with young people like Lucas Keller - seen on the left - and explain there are more options for their future than college. (Photo by Warren Taylor)

With the ongoing controversy over higher education and student loan forgiveness, local students might like to know that there is a way for them to escape debt, learn a trade, and make a living all at the same time.

Amteck is an electrical engineering company that designs and installs above and below-ground electrical systems for its clients. It also offers equipment safety inspection and other electrical services.

Company representatives were on hand to explain its apprenticeship program, where an individual is hired by Amteck and learns the electrical trade while they work. The program lasts four years, and an apprentice gets a pay raise yearly. Ultimately, they take the required exams to become certified electricians.

Amteck also brought some mobile interactive exhibits to give students a look at some things the company does.

“We basically brought our roadshow. We’ve got a bus that has some interactive things on the inside, and we’ve got other placements we’ve set outside … The kids can come in and flip switches,” Dougherty said.

The exhibits are a vital component of the company’s recruitment process.

During his lecture, Dougherty emphasized electricians do not fix appliances or power poles and instead design and install complex systems that power residential and industrial buildings.

Twelfth-grade student Lucas Keller said he was not aware of the things licensed electricians can do and that the experience “opened his eyes.”

More importantly, it showed him there is another path for his future besides attending college.

“They showed us that you can build a career and not just work under someone. If you put in the time and effort, you can work your way up and do some amazing things,” Keller said.

Coy Hall is the principal of the Area Technology Center and said that students like Keller must see there is another way to prepare for their future.

The visit was part of a partnership between BCTC and the Kentucky Chamber of Commerce.

“We’ve partnered with the Kentucky Chamber and their Bus to Business program. We’ve invited them out today to present career opportunities in technical fields for our Clark County students,” he said.

Manley said Bus to Business helps connect students to industrial careers through tours and lectures like the Amteck representatives gave with one goal in mind.

“Hopefully, we will introduce students to a good-paying career,” Manley said.