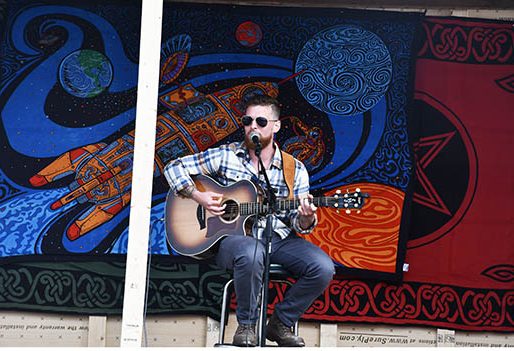 The sounds of Bluegrass music filled the air on Saturday during the first-ever Grasstoberfest Music Festival in Winchester.

The festival brought several musical acts to the stage on East Broadway Street and various food and craft vendors.

“We are really excited about this evening. We’ve got some great regional bands that are coming in to put on a show for us,” said Kidd.

So, what was the origin of the festival’s name?

“Bluegrass music,” Kidd said. “We live in the Bluegrass, and we’ve got Bluegrass bands coming in tonight, and we wanted to do a fun play on Oktoberfest.”

The festival had a unique seating setup. Bales of hay were arranged in front of the stage to add to the grass-themed ambiance.

It also had practical use.

“One thing we know about Winchester is that there is not a lot of public seating,” Kidd said. “So we wanted to come up with a fun fall-themed way of doing it, and hay bales are where we landed. So we worked with a local farmer to make it happen.”

The festival lasted from 11 a.m. and 11 p.m. and had drawn a decent crowd by late afternoon, though Kidd said he expected more people to roll in as day turned to night.

One of the reasons for that is the universal appeal of Bluegrass music. Kidd offered his thoughts on why it resonates with people.

“Bluegrass music is full of emotion, and it is full of passion. It tells a great story. I think it is something – no matter what genre of music you like – people can relate to by listening to the stories that come out of these songs,” he said.

Lincoln County native Daniel Cain, another one of the featured acts, called himself a heritage musician.

“I’m very influenced by the sounds I grew up around in Kentucky,” Cain explained. “My dad was an artist, and he played Bluegrass, Honky-tonk, and Blues. I’m also a child of the internet, and all of those have mixed together to make my sound.”

Cain had previously performed at Micki’s Irish Bar and was impressed with the festival and its people.

“It’s awesome,” he said. “The people here seem very genuine. They are ready to give their energy and attention. As an artist, that is something that I really crave. It’s an honor to be able to give back that energy as a performer.”

Matt Fassas is from neighboring Estill County – he now lives out of state – and performed with his father, Tom.

“We’ve been playing together my entire life,” Fassas said.

Fassas described his musical style as a mixture of Rock and Country and that he draws significant inspiration from Jimi Hendrix.

He was also impressed with the festival setup.

“I know this is the first year they have done it,” he said. “It looks good. There are good trucks here. The stage looks good. The sound is good. The artists have sounded really great so far.”