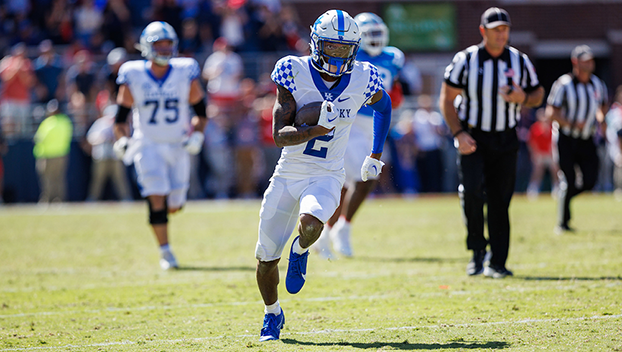 Kentucky couldn’t overcome its own mistakes in a a 22-19 loss at Ole Miss Saturday, ending the program’s eight-game winning streak.

It was the first setback of the season for the seventh-ranked Wildcats (4-1, 1-1, Southeastern Conference), who missed a field goal, had a point after attempt blocked, missed another, allowed a safety and had two fumbles inside the red zone in the final five minutes.

“We certainly had our opportunities,” Kentucky coach Mark Stoops said. “It came down with two opportunities late in the red zone. We came away with zero (points). …  Obviously, it’s a very difficult loss. It’s just heartbreaking for our players.”

Will Levis threw for 220 yards and two touchdowns to spark the Kentucky offense but had a fumble on what would have been a first down run at the Ole Miss 16-yard line with 2:55 remaining. The Wildcats got the ball back on a three-and-out, but a Levis-to-Dane Key touchdown pass was wiped out by an illegal motion penalty, and Levis fumbled the ball again while attempting a pass under pressure.

Ole Miss sacked Levis three times, had nine tackles for a loss, and pressured Kentucky’s offense throughout the contest.

Kentucky welcomed the return of standout running back Chris Rodriguez Jr., who missed the first four games because if a suspension. Rodriguez rushed for 72 yards on 19 carries and a touchdown. He also caught three passes for 40 yards in his first appearance this season.

Barion Brown turned in another impressive performance for the Wildcats and had 250 all-purpose yards. Brown had two catches for 81 yards and just missed scoring on a 51-yard catch from Levis in the fourth quarter. He had three kickoff returns for 164 yards.

Kentucky’s defense did its part to keep the Wildcats within striking distance and has allowed less than 23 points in nine straight games, dating back to last season. Jacquez Jones, an Ole Miss transfer had five tackles and collected the second interception of his career in the second quarter. DeAndre Square led the Wildcats with 11 tackles.

In its conference opener, Ole Miss defeated the Wildcats for the third straight time by a combined margin of seven points and remained undefeated at 5-0 on the season.

“Our defensive guys really showed up with those two turnovers at the end to win it,” Ole Miss coach Lane Kiffin said. “At the end, our team found a way to come through.”

Keith Taylor is the sports editor for Kentucky Today. Reach him at keith.taylor@kentuckytoday.com and via Twitter at keithtaylor21.