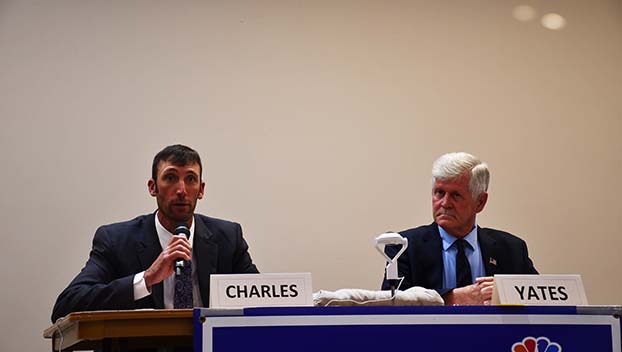 Democrat Justin Charles and Republican Les Yates shared what they would bring to the office of judge-executive on Monday night. (Photo by Warren Taylor)

Clark County will have a new judge-executive by the time the new year rolls around, and on Monday, voters got a chance to hear from the two men – Justin Charles and Les Yates – vying for the office during the first of two candidate forums held at the Clark County Extension Office.

Charles, who is running as a Democrat, extolled his virtues as a hometown man who has run a residential electric company for the past 15 years.

He is running to unite people.

“I’m seeking this office because I feel like there is a strong divide in our community. In my eyes, we are all on the same team, and our political views cannot hinder our vision or ability as elected officials to make decisions for the greater community,” Charles said in his opening statement.

Republican Les Yates emphasized his unique background in business, the U.S. Air Force, and as a former state representative.

“I think all these things, especially the representative, has prepared me for this job,” Yates said in his opening remarks before stating he also wants to bring people together. “I think that the way we are going to make Clark County grow is we all have got to come together. There is a lot of division in the county. One of the biggest divisions is the politics, and I think that is one of the things I’d like to work on very strongly.”

The first question posed to the candidates came from the audience and asked them to explain the duties of the office.

Yates answered first and said that many people do not know their magistrate or county judge and that he is often asked by voters what they both do.

“The simplest way that I explain it to people, I tell them that a county judge-executive is the CEO of a company, and the magistrates are the board of directors. Their job is to handle and manage the finances of the county,” Yates said.

During his response, Charles agreed with Yates that a judge-executive’s job is to handle and manage the county’s finances.

“The judge-executive should be responsible for organizing everything and getting the meetings in order, making sure everything is on the agenda, and going down the line and getting it taken care of while the meeting is going on,” Charles said. “I also feel that the judge-executive should be responsible for being out and being seen, and talking to people and asking them what they think.”

The second question asked each candidate to explain their leadership style.

Charles credited his way of leading to what his mother and father taught him.

“You cannot be a leader without being a worker first. You lead by example, and that is where my strengths come into play. I work hard. I do what I know is right, and that is the only way you can lead people to me is to show them that you are willing to put in the time, do the work, and do what is right,” Charles explained.

Yates said that, in his opinion, the best leadership style is participative management.

“I think that any manager that is good can go into any company and manage any department as long as you understand how to manage. And one of those ways is to surround yourself with competent, intelligent people that care about their job and are willing to do their job. Your goal is to give those people everything they need to do that job.”

The candidates were then asked how they would help local families stay financially stable as judge-executive.

Yates said that the best way to keep people out of poverty is through education and that once you get them working, they can lift themselves out of dire financial straits.

Charles agreed that education was vital and said he wanted to hold a series of forums for county residents about financial preparedness.

The final question asked both candidates what Clark County’s best asset is and how they could use that to grow area business/industry.

Charles answered that Clark County’s best asset is its people and that the area can use that strength by “getting more people involved in our local government” and getting “people proactive in trying to recruit people and businesses to come here.”

He also named the county’s “beautiful farmland” and a “goldmine” in tourism around the Fort Boonesborough area as assets.

In last week’s print edition, the following comment: “The judge-executive should be responsible for organizing everything and getting the meetings in order, making sure everything is on the agenda, and going down the line and getting it taken care of while the meeting is going on … I also feel that the judge-executive should be responsible for being out and being seen, and talking to people and asking them what they think,” was incorrectly attributed to Les Yates. Justin Charles is the candidate who said it.