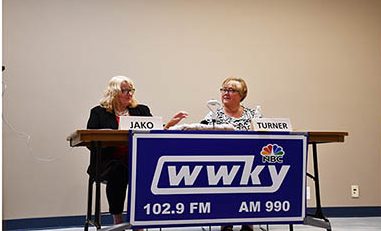 Republican Linda Jako and Democrat Michelle Turner are vying for the office of Clark County Clerk. (Photo by Warren Taylor)

Current Clark County Clerk Michelle Turner, a Democrat, will defend her office against Republican Linda Jako on Nov. 8, but before the voters cast their ballots, they got the chance to hear from both candidates during a candidate forum on Monday at the Clark County Extension Office.

During her opening remarks, Jako highlighted her 25 years of experience working in the clerk’s office and her experience as a businesswoman.

She also discussed changes she would like to bring to the office.

“I will provide an updated and innovative website, user-friendly, to better serve you, the people. I will also be adding later hours to serve you,” Jako said.

Turner spoke about how she started as a janitor at the Clark County Courthouse and then took a job working in the clerk’s office before running for and winning the office in 2014.

She mentioned changes she brought to the office during her opening remarks.

“Since taking on the job as county clerk, I have started Saturday hours, which I work every Saturday, and we accept credit cards. Two things of which I am very proud of,” Turner said.

The first question posed to the candidates was if they would keep  Saturday hours if elected.

Turner had the first opportunity to answer and said she would keep Saturday hours, especially since not all Clark County residents can make it to the clerk’s office during regular business hours.

Jako responded that she did not know if Saturday hours would continue if she was elected because she wanted to ensure the budget allowed it, but she would like the practice to continue.

The next question asked what kind of training each candidate would provide the office’s staff if elected.

Jako pledged to undergo all training herself and that she would be a hands-on clerk.

“I will also do monthly training for our girls and guys in the clerk’s office. So we will do ongoing, monthly training to make sure they know all the KRS statutes and laws to make our office operable and save you, the taxpayer, money on tax exemptions,” Jako said.

“You take people with you that pertain to that particular area. So if it is an election meeting, the election people go. If it is land records, the land records people go,” Turner said.

The next question asked the candidates to reassure voters that Kentucky’s elections are secure.

She referred to a time recently when Kentucky Secretary of State Michael Adams said that other states often asked him how Kentucky had such “great elections.”

Jako disagreed and said that during the primary election in May, people in Clark County had “thrown ballots” and that she wished she knew “how many people had thrown ballots, but we have no way of knowing that.”

She said that election workers had only two hours of training beforehand and did not have the training “to ensure the election is done right.”

The final question asked both candidates to identify recent election procedure changes they agreed with and disagreed with.

“The one thing that I don’t agree with is that we have got the three days of early voting. I think we should have your Election Day. The early voting requires more people to work, and also it makes it confusing for people,” Jako said.

“I think the early voting is great. Not everyone can make it on election day if you are a nurse or a doctor or whatever. The three days make it more accessible to the public,” Turner said.