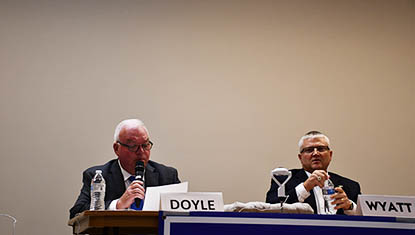 Incumbent Frank Doyle. a Democrat, will go against Paul Wyatt, a Republican, in November to decide who will be Clark County Jailer. Both candidates spoke on Monday night at the Clark County Extension Office.

Before his time as the jailer, Doyle worked at the Fayette County Detention Center and spent two decades with the Winchester Police Department. He is on the board of directors of the Kentucky Jailers Association.

Wyatt has 25 years of leadership experience. After graduating from Eastern Kentucky University with an emphasis on homeland security and corrections, he spent 18 years in the U.S. Department of Defense Special Operations Division. He has been a minister for 22 years, a small business owner, president of a nonprofit group, and a founding board member of the Beacon of Hope Emergency Shelter.

Wyatt’s response was to work from a bottom-up and top-down approach; hiring, training, and keeping employees. The average turnover rate in the county is 16.1%, or eight team members yearly.

“From current employees, they’re telling me at least 50 people have left the detention center in the last year; that’s six times the average,” Wyatt said. “That will cost us half of their salary to $17,000 to $53,000 per employee.”

Employing the correct staff to get the right programs and lower the inmate return is necessary, according to Wyatt.

Doyle responded the detention center regularly speaks with judges and the Clark County Attorney, yet this was outside their control.

“People commit crimes. They’re placed in jail. That’s what our job is, [the] care, custody, and control of these people,” said Doyle.

Doyle said that the detention center requires paperwork when inmates come in and go out. The court system controls sentences. This isn’t a jail problem but one it must deal with.

Candidates were asked about using a full-body scanner.

Doyle is against it.

Doyle addressed a consideration others have had: a full-body scanner allowing staff to detect inmates carrying drugs.

“That’s true to a certain extent, and then it could be human gas,” he stated. “It’s been proven we would go for about 17 years before we ever had [back] that kind of money invested in it.”

Stating that he had researched and traveled the state, Wyatt contends that successful detention centers have full-body scanners similar to airports.

He states one officer was arrested for bringing in contraband.

“It’s out of control. [A full body scanner] will not eliminate it, but it will definitely slow it down”, Wyatt said.

“I will be pushing the magistrates to bring that in [on] day one,” Wyatt said.

A third question dealt with programs currently in place, or that will be implemented to reduce the detainment of inmates multiple times, known as recidivism.

Wyatt acknowledged some programs are already present yet added that he wants to offer different selections.

Mentioning that programs get looked at daily, Doyle noted that Achieving Recovery Together, Narcotics Anonymous, Alcoholics Anonymous, Celebrate Recovery, and others are effective and should be credited.

He said programs such as Isaiah’s House have also been considered.

“You have to consider what’s best from the situation of the jail that’s in Clark County,” Doyle added. “We’re always going to try to improve. We’re trying to help that person.”

Candidates were asked about the workforce; how to retain and help employees.

Doyle said employees began at $7.25/hour in 2015. They now start at $17/hour, an improvement compared to surrounding counties.

Outside inmates, both in and out of state, are now housed at the detention center to produce income, offsetting costs.

“We’re doing everything we can to get better people to help retain the people we have,” Doyle said. “It’s like riding down the road on a bus. Not everybody’s going to make it. Sometimes you have to stop the bus and let somebody off.”

Wyatt responded the turnover rate was problematic and that good leadership was essential for effective change.

“You can’t give your employees something that’s [broken]. You need to fix it,” Wyatt said. “I will systematically break down from top to bottom, bottom to top, to figure out what’s going on at the detention center.”

Wyatt acknowledged this would involve changes, though it would be to take the proper steps for moving the detention center forward.