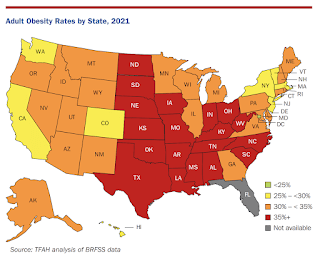 A new report says Kentucky has the second highest adult obesity rate in the nation, and Kentucky children aged 10 to 17 have the nation’s highest rate for that age group.

The Trust for America’s Health19th annual report says four of every 10 Kentucky adults are obese. And 72.3 percent are either obese or overweight, third in the nation. Among the state’s high-school students, 18.4% are obese and another 17.8% are overweight.

“These persistent increases in obesity rates underscore that obesity is caused by a combination of factors including societal, biological, genetic, and environmental, which are often beyond personal choice,” says a news release from Trust for America’s Health. “
The report’s authors conclude that addressing the obesity crisis will require attending to the economic and structural factors of where and how people live.

Obesity is associated with a many different health conditions and is estimated to increase U.S. health-care spending by $170 billion every year, the Trust for America’s Health report says.

Kentuckians struggle with all of these conditions. Nearly 14% of the state’s adults are diagnosed with diabetes and 40.3% are diagnosed with hypertension, ranking Kentucky fifth for both conditions.
The report says Kentucky women’s obesity rate is 40.9%, while men’s rate is 39.8%, plus or minus 2.7 percentage points.
Obesity rates by county in 2018-20, the latest range available, are published by the Foundation for a Healthy Kentucky at kyhealthfacts.org.
Child obesity: When it comes to age, Kentuckians between 45 and 64 have the state’s highest obesity rate, 46.2%. That’s followed by those 25 to 44 (42.5%), 65 and older (35.3%), and 18 to 24 (28.2%).
The rate for Kentuckians 10 to 17 is 23.8%, the nation’s highest. Nationwide, nearly 20% of children between the ages of 2 to 19 are obese. “These rates more than tripled since the mid-1970s,” the release says. “Black and Latino youth have substantially higher rates of obesity than do their white peers.”
One way to help children and their families address childhood obesity is through an electronic health records that help doctors monitor body-mass index, the basic measure of obesity, according to a University of Missouri School of Medicine study.
The three-year study found that a tool called FitTastic was an effective in decreasing BMI in children, especially young children. It works by helping health-care providers communicate with families about five daily lifestyle behavior goals: At least one hour per day of physical activity, limiting screen time to two hours a day or less, three daily servings of low-fat milk or calcium, at least four servings of water instead of sugary drinks, and at least five servings of fruits and vegetables.
“We found a nearly 20% more favorable BMI pattern in the FitTastic group compared to the control group when looking specifically at children who were either overweight or obese,” said the principal investigator, Dr. Amy Braddock. “The data was especially favorable for younger children, between the ages of 2 and 5 years old.”
Body mass index is calculated by dividing a person’s weight in pounds by their height in inches times two, and then multiplied by 703. An adult is considered obese if their BMI is 30 or higher, and is considered severely obese if that level is 40 or above. Children’s BMI are compared to other children of the same age and sex, since there are fluctuations in their growth and development.
The Trust for America’s Health report includes a detailed list of recommended policy actions to address the social and economic drivers that contribute to obesity. The actions can be implemented at the federal, state and local levels. They include:

“The continued increase in rates of obesity across all population groups is alarming,” Dr. J. Nadine Gracia, president and CEO of Trust for America’s Health, said in the release. “Policies and programs to reduce obesity need to be implemented at a systems level. We must advance policies that address the community, institutional, and structural factors that are barriers to healthy eating and physical activity and that exacerbate health inequities.”

Data for the report is based in part on the Centers for Disease Control and Prevention‘s Behavioral Risk Factors Surveillance System, a continuous national poll.