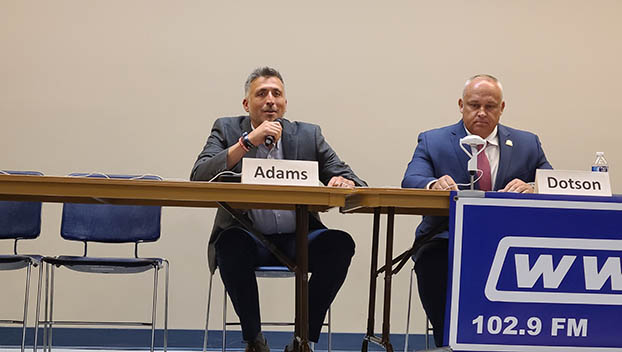 Thomas Weston Adams III is challenging Rep. Ryan Dotson for his seat in the Kentucky House. (Photo by Warren Taylor)

Before incumbent Republican State Rep. Ryan Dotson defends his seat in the general election against Democratic challenger Thomas Weston Adams III, the voters got a chance to hear from each candidate during a forum on Thursday held at the Clark County Extension Office.

Adams began his opening remarks with the promise he would be a better state representative for the area.

“I believe I will be a better representative to you, sir, than you have been to me,” Adams said to the audience and Dotson. “I believe that I prove it every single day … I am trying to develop a reputation as the guy around here you can call if you need something.”

During his opening remarks, Dotson recalled fighting against mask and vaccine mandates and trying to bring new businesses to Kentucky during his first year in office.

“In the second year of my term, I championed two wonderful bills that has now become state law,” Dotson said. “The first is Save Women’s Sports … This needed to be done to protect our young ladies in sports and prevent biological males from playing girl’s sports … Secondly, House Bill 319 is a domestic violence bill that protects our pets in domestic violence situations.”

The first question asked the candidates to explain their position on student loan forgiveness.

“It’s really unfair for those that did not go to college that are working their butts off every day. It’s nice to write a big check and get people on board for the next election, but I don’t think it is fiscally responsible,” Dotson said. “I think there are better ways to look at this issue rather than putting that burden on all of the Americans. We need to sit back and really take a dive and look at a deep study looking at college and looking at trade schools as viable options that are affordable.”

Adams provided a contrasting view with his answer.

“Luckily for us, that is a federal issue that is being taken care of in a different place, but let’s talk about that means for folks in our community. We want to make education possible for everybody here,” Adams said. “We want to make educational opportunities better here … But we do have a lot of social services available to help our people when they are in need. Businesses are able take out PPP when they are in trouble, just like students should be able to take out loans when they are in trouble. And I want to make sure we are not abusing the people who we need to lead us down the road because right now they are saddled with so much debt, and they are not able to become the leaders that we want them to be.”

The next question stirred the passion of those in attendance: how each candidate felt about the U.S. Supreme Court overturning Roe v. Wade earlier this year.

Adams called the decision and its accompanying legislation a “disaster.”

“We’ve allowed our supermajority in the House of Representatives and the Senate to do something unconscionable. Not only did they vote to ban abortion, but they did so without exceptions,” he said.

Adams said that those in the general assembly had the chance to amend the legislation to make exceptions in the cases of rape and incest but chose not to.

Dotson, a member of the Republican supermajority, defended his actions.

“When my opponent says he is talking about everybody, he is leaving out the most vulnerable among us, and that is our babies,” he said.

Dotson said that legislators are meant to be defenders of the commonwealth and that no one is more vulnerable than children. He said that life began and ended with a heartbeat and pledged to be a fighter for children in the womb and in schools.

The third question asked the candidates what unity meant and how they would use it in Frankfort.

Dotson said there are issues that he and Adams would disagree on, but there are some they would, such as infrastructure and jobs. He said that he wanted there to be no bad blood between him and Adams after the race but also said it was up to voters to decide which candidate best represented them.

“The voter has to decide, who am I going to line up with? Who holds the most of my values?” Dotson posed.

Adams said that Dotson was on the wrong side of things.

“Sixty-one percent of folks, including Republicans, view your policies as too extreme. Upwards of 80 percent of folks in Kentucky believe that the choice that was made to pass that law was wrong,” Adams said.

He said that sometimes unity means allowing the people one disagrees with to have their way.

The final question asked the candidates to assess their strengths and weaknesses.

Adams said it was hard for him to “shut up,” and he will be the “annoying guy in the room” who speaks up when injustice is happening.

Dotson said his biggest weakness is an inability to say no and that he lets people walk all over him, but that his strength is that he is a tenacious fighter for the things he believes in.