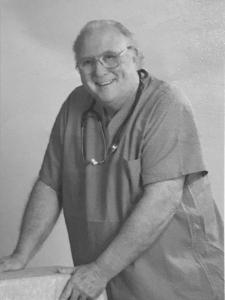 ”To be born Welsh is to be born privileged. Not with a silver spoon in your mouth, but with music in your heart, and poetry in your soul.” Wilfred Wilson

Dr. Laurie Reynold Thomas (87) was born in Carmarthenshire, South Wales, Great Britain, on June 3rd , 1935, to Marianne Griffiths Thomas and David Benjamin Thomas. He was an outstanding rugby player for Saint Bartholomew’s Medical College of the University of London, England, where he graduated with honors. He was selected to come to the United States for general medical surgery training under Dr. Ben Eiseman, Chief of Surgery at the University of Kentucky Medical Center in exchange for a student sent to St. Bartholomew’s to study under Sir Naunton Morgan, Laurie’s prior chief of surgery.

While in Lexington for his residency, he met the love of his life, Ann Heath Moloney of Augusta, KY. After they were married, he completed a three-year residency at the Cleveland Clinic in Otolaryngology followed by a National Institute of Health Fellowship with Mercy Hospital in Pittsburgh where he specialized in surgery for cancer of the head and neck. Laurie and Ann eventually settled in Lexington where he became the first ear, nose, and throat surgeon with the Lexington Clinic. Later, he went into private practice in Winchester where he founded the Thomas Otology and Audiology Clinic, and later added allergy services after achieving his specialist degree in allergy.

Dr. Thomas never forgot his Welsh roots but was proud to be an American, gaining his citizenship in 1976. He lived the American dream of coming to this great country, falling in love, rearing and educating a family, and serving thousands of patients through his medical practice. He was an entrepreneur, starting the Glenbrook Trout Company, raising trout for retail sale to restaurants and grocery stores. He was a horseman, riding with the Iroquois Hunt Club, and owned several racehorses including “Raise the Bridge”, a multiple stakes winner. He was also a jump judge for the first World Three-Day Event held at the Kentucky Horse Park. He and Ann were honored to donate land for the establishment of a healthcare clinic in Bracken County.

He was a kind and giving man, always taking time to help those around him. He is remembered by so many for his caring bedside manner and prayers for his patients. He always had a good sense of humor and keen wit. His greatest delight was his family. He cherished his children and grandchildren’s athletic endeavors and activities and always took an interest. He enjoyed all types of music including opera, classical, and Kentucky Bluegrass. He enjoyed raising Black Angus cattle and was one of the first to raise Wagyu cattle in Kentucky. Because of his affection for animals, he volunteered to operate on dogs to restore their hearing. He was truly a renaissance man, the last remaining of seven siblings. He will be deeply missed.

A private family celebration of life will be held at the Augusta Christian Church where he and Ann were married 58 years prior. The service will be conducted by Reverend Joseph Cooper, former Pastor of First Christian Church in Lexington.

The family requests in lieu of flowers please send remembrances to: