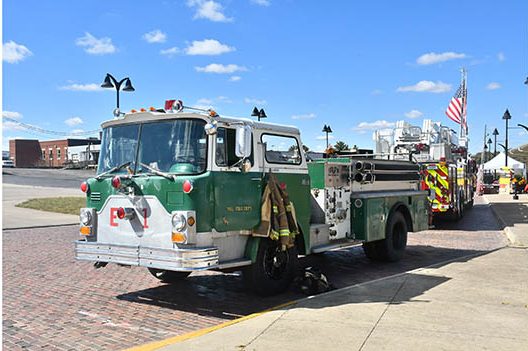 A classic fire engine was just one of the many things event-goers saw on Saturday. (Photo by Warren Taylor)

“Most people don’t realize that you only have minutes, if seconds, to get out of your home, and you would be surprised at how well you don’t know your home if a fire were to erupt,” he said.

That is why the Winchester Fire Department (WFD) hosted a free fire safety event Saturday on Depot Street. The theme was “Fire won’t wait; plan your escape.”

“We are trying to tell people to make sure they are planning to have ways out,” Wheeling said.

During the event, the WFD and the Clark County Fire Department brought their engines and other safety apparatuses for the public to view and explore. Attendees received prevention-themed goody bags and saw demonstrations on how to use a fire extinguisher properly and how the jaws of life help rescue someone from a crushed vehicle.

Teaching the public was the event’s primary objective, though.

“It is like planting a seed in their head,” Wheeling said. “We tell them about it. They may not remember it during the day, but when the incident happens, it is there.”

According to Wheeling, a good fire prevention plan includes an escape route with two or more exits, closing the doors at night to create barriers, and changing smoke detector batteries when the time changes in the spring and fall. And the best thing families can do is to practice their plan as often as possible

One should also be prepared outside the home should a fire occur.

“Plan your escape anywhere you go, even if it is the grocery store. Look for ways out and look for extinguishers … Look for exit lights and dial 911 in the case of an emergency,” Wheeling said.

Should a fire occur, there is one piece of information that the public needs to keep in mind.

“People think that fire kills people, which is far from the truth. It is the smoke that kills people,” Wheeling said.

To avoid the toxic gases that can render someone unconscious, Wheeling advised people to stay low to the ground and cover their mouths when escaping a burning building.

Outreach events like the one on Saturday are one of the most important jobs the fire department has, in Wheeling’s opinion.

“There is no better way to get the word out than face-to-face,” he said. “They [the public] get to talk to people who experience what fire is. We go inside when they come out, so we know the dangers of it.”

Knowing what to do is essential since fires are so common.

“If it has not affected you, it will, or somebody in your family or your community. You read about it every single day or see it in the news,” said Winchester Fire Chief Chris Whiteley.

Knowing that a human being is in the fire suit also helps build trust, and fire prevention events help with that, according to Whiteley.

“The only time we see people usually is on their worst days,” he said. “When we show up, we are wearing so much gear, and you can’t put the face behind it … So get to those fire stations, meet firefighters and get to know them as people.”