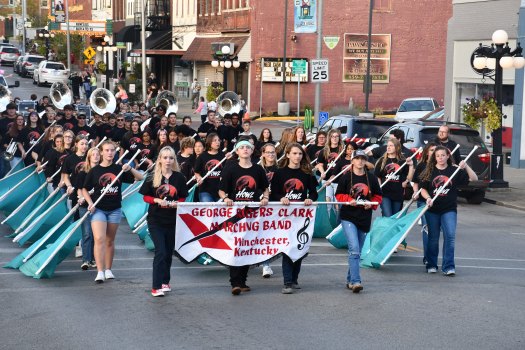 The George Rogers Clark High School Marching Band played as it marched down the parade route. (Photo by Matt Cizek) 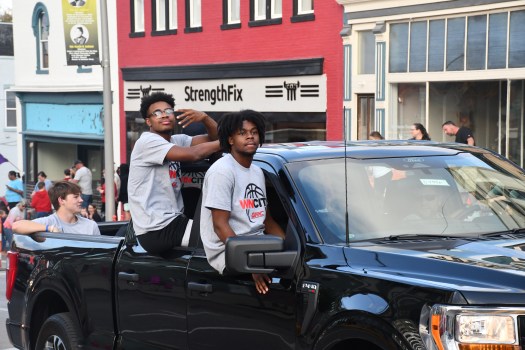 Members of the 2022 state championship basketball team rode in their second downtown parade of the year. (Photo by Matt Cizek) 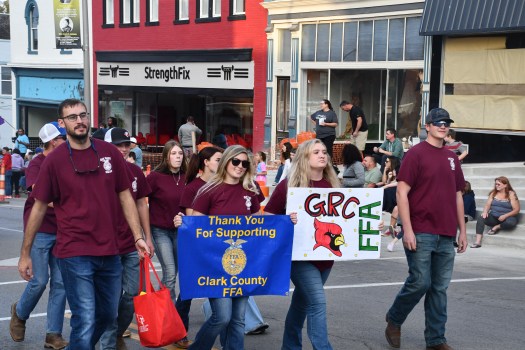 Student organizations like the Future Farmers of America were well represented during the parade. (Photo by Matt Cizek) 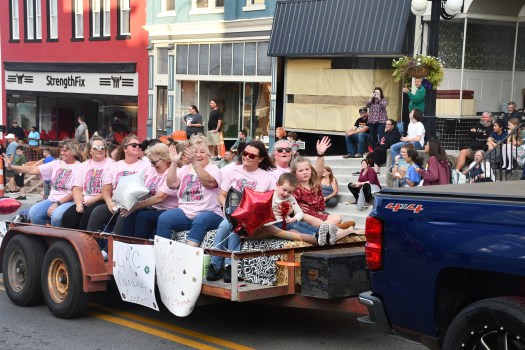 The GRC kitchen staff even joined in on the fun! (Photo by Matt Cizek)

Starting on Depot Street, one could see a cavalcade of vehicles and floats led by four police vehicles driving along Main Street on Thursday night.

The homecoming parade came through downtown at 6:00 p.m., as hundreds cheered in the streets for various teams, groups, and individuals associated with George Rogers Clark High School.

Just as well, individuals on the Homecoming Court received notice.

Freshmen Santiago Guerrant and Campbell Sutherland were honored on one float. On another were sophomores Kalen Washington and Chellbie Holman. A third float had juniors Joey Hill and Makili Tabor.

Each float was announced to the waiting and waving crowd near the Clark County Courthouse.

Candy, such as suckers, Tootsie Rolls, and more, were thrown to different onlookers for enjoyment.

While GRC students and teams might have been the highlight of the evening, they were far from the only honorees.

Cardinal Cookers, representing the kitchen staff, also had their own float.

“It was important because they take care of us just like our [administration] does,” said Jones. “We wanted to showcase them especially [to] let them know what wonderful ladies we have taking care of all our children.”

A long-time educator in the Clark County area, Howard appreciated the sense of thrill it gave to students.

“Seeing their faces light up and be the center of attention and the whole community here on Main Street, I don’t think it gets better than that,” Howard said.

It can also serve as an opportunity to unite Winchester.

“I think it is about building our community, including everyone here, parents, [and] stakeholders,” Howard said. “There are people here that have no kids, but they want to celebrate Clark County. I think that’s what makes an event like this so special because it goes across generations.”

It’s an experience that Jones hopes will be memorable for students in the long term.

“They love seeing these people come out and support them,” she said.