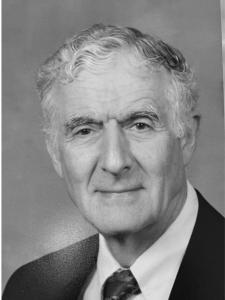 Clarence Victor (Vic) Bloomfield passed away on October 11, 2022, at the age of 97. With his death, Winchester lost one of its prominent native sons and most ardent champions. He often said there was no place he would rather be than his hometown.

He is survived by his loving wife of 72 years, Mary Swetnam Bloomfield; two sons, John Bloomfield of New York City and Tom Bloomfield of Nashville, TN; a daughter, Anna Mary (Jim) Winer of Atlanta, GA; and three grandchildren, James, Ellen, and Mary Winer. Preceding him in death was his youngest son, Jim Bloomfield.

Vic was born in Winchester on November 23, 1924, the only child of Clarence and Catherine Day Bloomfield. After graduating from the Kentucky Military Institute, he attended Centre College in Danville, KY. During World War II he served as an Ensign in the Navy. He was deployed to the Pacific Theater and remained on Okinawa until after the war’s end. Upon his return, Vic completed his business degree at Centre College. The day after his graduation in June 1948, he started working in the family business, Vic Bloomfield & Sons, a women’s clothing store founded by his grandfather, also named Vic, and great-grandfather, George, in 1885. Vic worked alongside his own father for 29 years, adapting the business as tastes changed. Throughout his career, his customers could count on personalized service, regardless of their circumstances. After his father’s death in 1977, Vic continued to run the store for another 12 years. In 1989, one of the chapters in the town’s life came to an end when Vic retired after 41 years, closing a business that had stood on Main Street for four generations and more than a century. He was deeply gratified by the outpouring of community appreciation he received upon his retirement.

Vic was a dedicated member of Winchester’s First Baptist Church, where he served for decades as a deacon and Sunday School teacher. He was also active in the Chamber of Commerce and Rotary Club, enthusiastically contributing to Winchester’s civic life. He took great interest in the maintenance and revitalization of the downtown area and was particularly proud of the drive in 1983 to re-create Winchester’s “White Way” on Main Street with replicas of the five-globed lamp posts originally erected in 1912.

Vic had a special gift for playing the piano by ear. He particularly enjoyed playing jazz standards from the Big Band era and was happy to lend his talents to many local events.

Visitation and funeral will be at the First Baptist Church, 32 East Lexington Avenue, Winchester, KY, on Saturday, October 15. Visitation will be at 10:00 a.m., followed by the funeral at 11:00 a.m. Rolan G. Taylor Funeral Home is in charge of arrangements.