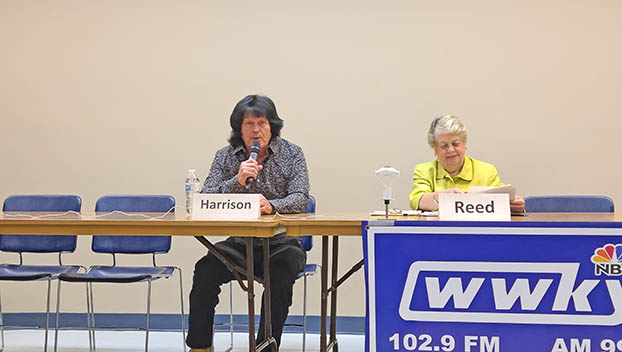 Ralph Harrison and JoEllen Reed are running to become the new mayor of Winchester. (Photo by Warren Taylor)

Winchester will have a new mayor after voters decide between JoEllen Reed and Ralph Harrison in November, but last Thursday, they heard from the candidates at a forum held at the Clark County Cooperative Extension Office.

“I’m running for mayor because I feel like I can do a lot for the community. I am interested in people and am interested in helping them. I don’t have a whole bunch of money to give them, but I have a whole of knowledge to tell them how to do and make money,” said Harrison in his opening statement.

He added that if “something was right,” then he was for it,” but if something was wrong, then “you have to talk to me about it a whole lot.”

In her opening statement, Reed spoke about her affection for the community.

“Those of you that know me know that I love this community with all of my heart. I was born here, I was reared here, and I plan to die here. Winchester is my home,” Reed said.

She highlighted her “22 plus years in public service in the city, in the county, and in the state government” and asked voters to imagine the kind of city they want to live in.

The first question the candidates answered asked them their opinion on the health department’s needle exchange program.

“I very strongly believe in the needle exchange,” she said.

Reed said she heard a story from the fire department about having to revive two people that overdosed back to back in Wall Alley.

“It’s an epidemic,” Reed said about the local drug problem. “We need to figure out how to use clean needles and then get people off of those drugs.”

Harrison’s response centered around how the epidemic affects the community.

“This drug epidemic thing is really tough on everybody,” he said. “If you have a kid that is having problems like that, it is hard on [the] family. This NARCAN thing, if they are on it so bad that they have to have that, then they are really in bad need of a lot of help.”

Harrison said it would take the entire community to fix the problem.

The next question asked how the candidates would get the “good old boys” on board to help the community.

Harrison said it would take money. Specifically, with good jobs and more money, “people can do a whole lot more good.”

Reed jested that she is running to give the community “a good old girl” but that when proponents of said system asked her for favors, she told them she would only do “what is right for this community.”

The next question asked if the bypass extension and connection would be a priority for the candidates.

“Yes, I support that, especially when I go to pick up a young lady that is like my daughter at the high school and have been stuck in traffic for 35-40 minutes,” she said.

“I surely support tying it together because it needs to be and has needed to be for a long time,” he said.

The final question asked the candidates to explain their leadership style and how they would lead a group that might not always agree with them.

Harrison said he would use his persuasion and listening skills.

“I feel like that my opinion on a lot of issues, like I said, I’m for the right thing whatever it is that is what I’m for, if I got somebody or a group of people that don’t like the right way, then I’ll explain to them the best I can about how I am sure it is the right way; then I want their opinion, and then we’ll mix them together,” he said.

“It is inclusive of all people. I have friends all over this community in all neighborhoods, and their opinions matter,” she said, noting the other is servant leadership. “That is why I’m running, so I can serve this community.”