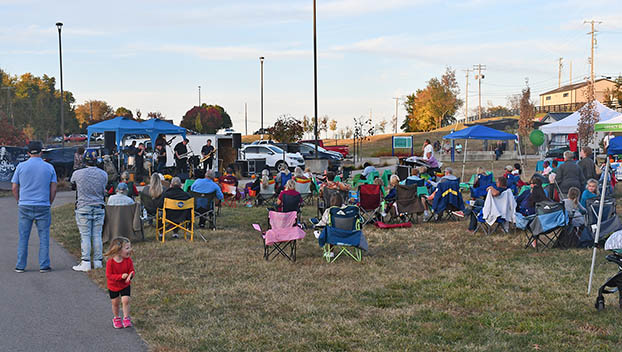 After a summer and early fall of music and entertainment, this season’s Legacy Nights series ended on Tuesday.

Dozens of citizens from in and out of Winchester showed up at Legacy Grove Park to hear live music and enjoy some fun and games.

It’s the sixth event in as many months and started on May 11.

“Winchester has all the potential to bring people in like Lexington brings people, like Richmond brings people,” said Deborah Jackson, the executive director of Legacy Greenscapes. “We’re trying to bring more music, art, support our food trucks, [and] bring everybody together.”

This past week’s edition featured the musical team of Big Sugg and the Jazz Funkers.

Previously, the award-winning group was honored as Artist of the Year at the Lexington Music Awards in the Jazz, Latin, Big Band, and World category.

“We’re going to do a bunch of 60s and 70s jazz funk fusion standards,” said Matt Polahsek, the saxophone player for the band. “We’ll also do a bunch of New Orleans-based music that has some second-line beat to it, which is really special.”

The band also has experience playing Memphis-style jazz, even though many work full-time jobs during the day.

“Most of us do other things because there’s just not enough market really for everybody,” Polashek said. “A lot of musicians sort of teach lessons or teach at a college or do gigs or sound or production work. So, it’s a big amalgamation of different activities to make it work for musicians here.”

Attendance for the event wasn’t a concern, as many gathered on the outdoor lawn.

Bob and Pam Kohner, who moved to the area approximately one year and a half ago, are veterans of the Legacy Nights series.

“These guys are fantastic and we’ve been to several of these,” said Bob Kohner. “We’ve been to the drumming circles. We go to those in Florida, and the ones up here are just as good or better.”

“I want to send a word of thanks to all of our sponsors of this series,” Jackson said. “They made this happen. It is 100% funded by sponsorships and donations from patrons like you and the people who have enjoyed this series.”

Legacy Grove Park will continue to organize events in the coming weeks and months.

Reflecting on the last several months, Jackson maintains a positive feeling and optimism for the future.

“We’re really excited. Now it’s all about next year,” she said. “We’re all super pumped about what we are going to do. We’re going to make it even better.”