Parents urged to talk with teen drivers about safety behind wheel 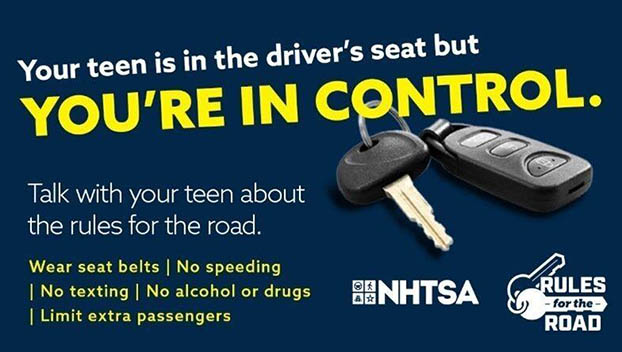 The Kentucky Transportation Cabinet wants parents to talk with their young drivers about the importance of driving safely, as they join the National Highway Traffic Safety Administration (NHTSA) in their efforts during National Teen Driver Safety Week, Oct.16-22.

“Driving is a rite of passage for many teens, but it can also be a difficult time for parents and guardians to release their teens to navigate the open road,” said Gov. Andy Beshear. “Having an open dialogue to teach and encourage safe driving habits, is one way parents can put their minds at ease before handing over the keys.”

According to the NHTSA, motor vehicle crashes are the leading cause of death for teens in the United States. Per mile driven, teens are involved in three times as many fatal crashes as all other drivers.

“Parents have a strong influence on their teens, even as they grow older and become more independent,” said Transportation Secretary Jim Gray. “Because they are new to driving, teen drivers are a potential danger to themselves and to other road users, which is why it is so important that parents take time to discuss safe driving practices.”

According to KYTC’s Office of Highway Safety, over the past three years in Kentucky, there were more than 48,000 crashes involving a teenage driver, resulting in more than 14,000 injuries and 187 deaths.

They offer six basic rules of the road for teens:

–Avoid distracted driving, such as talking or texting on cell phones.

–Wear seat belts, as they are the best protection against injury and death.

–Take extra caution while driving with passengers. The NHTSA says the likelihood of risky driving by teens triples when traveling with more than one passenger.

–Obey speed limits, as they are there to protect all road users.

“While we encourage parents to discuss rules for the road, it’s also important to show teens how to implement these rules by being a positive example when behind the wheel,” Gray noted. “Be a good role model. Drive sober, obey the speed limit, get enough rest before you drive, always buckle up and put the phone down.”