Stoops, Cats addressing issues, ‘get back to work’ 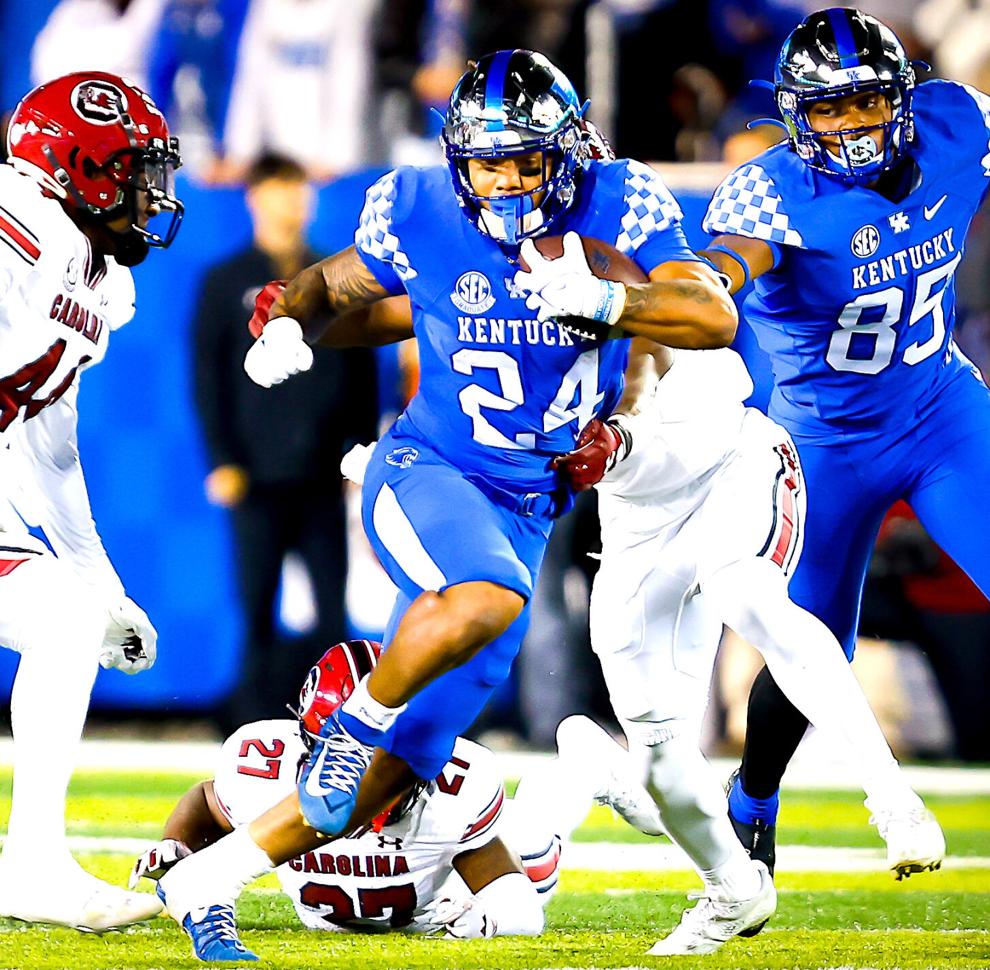 Kentucky running back Chris Rodriguez rushes for a first down in Kentucky's loss to South Carolina last Saturday at Kroger Field. (Photo by Les Nicholson/Kentucky Today)

Kentucky football coach Mark Stoops has a solution to his team’s recent struggles on the field.

“There’s nobody that’s going to feel sorry for you. You get back to work, get back on the horse and get back at it here this week.”

Following back-to-back losses, including a 24-14 setback to South Carolina in their last outing, the Wildcats (4-2, 2-2 Southeastern Conference) will attempt to get back on track against surging Mississippi State (5-1, 2-1) in a homecoming game Saturday at Kroger Field. The Bulldogs have won three in a row, including a 40-17 win over Arkansas last Saturday.

Stoops offered no updates on standout quarterback Will Levis, who sat out last week’s loss to the Gamecocks because of a foot injury. Stoops admitted not having Levis “doesn’t help your football team.” Levis remains listed as day-to-day, although he was listed as the starter on Monday’s depth chart.

Kaiya Sheron, a redshirt freshman making his first start in the absence of Levis, threw for 178 yards and two touchdowns, but Kentucky’s offense was mostly ineffective.

“But, that’s still no excuse for the way we played around him (Sheron),” Stoops said. “There are certainly things we could do better. I’ve addressed it after the game, and that holds true after watching the film.”

Stoops said Sheron “made some really good throws” in his debut but added there were some downfalls.

“He made some poor decisions on where his eyes were that led to bad plays and led to sacks,” he said. “We’ve talked about that with Will (Levis). It’s going to happen at times. it isn’t always on the o-line or protection, things of that nature.”

The Kentucky coach said there was plenty of blame to go around.

“We didn’t play very good around him at times,” he said. “There’s people that, there’s plays, but again the inconsistency (led) to the breakdown – a breakdown here, a breakdown there.

“You can’t put it on any one person. We, just as a group, didn’t play very good around him. I felt like that during the game, and I said it after, and that was certainly true after watching the film. He did some very good things. We need to play better and respond better around him.”

He added the team, collectively and individually, needs to address current issues that are plaguing his squad.

“There’s one way to get back on track, and that’s to work, for everybody, to take accountability, to look at their area first and have an impact on others.”