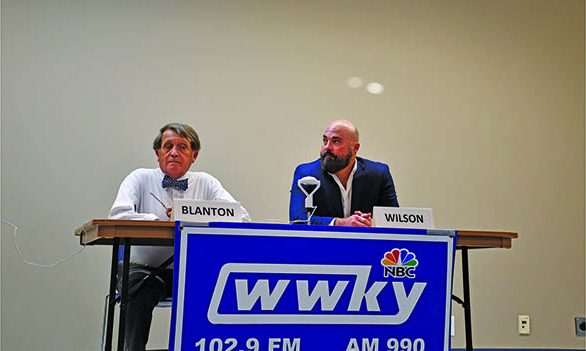 Numerically, the 6th Magisterial District is the last of Clark County.

However, it is far from the least.

Incumbent Robert Blanton (D) is running against Jeremy Wilson (R) for the position of 6th District Magistrate, and both spoke about their thoughts and plans for Clark County’s future at the Clark County Cooperative Extension Office on Oct. 3.

“This fiscal court in my eight-year term, we’ve had a whole lot of activity. We’ve done some good things”, said Blanton in his opening statement. “A lot of things going on that I’m very proud of as a magistrate.”

Among other accomplishments, Blanton listed paving Lykins Park, keeping taxes low, and personally supervising the dome replacement in the courthouse during his first term.

In his opening statement, Wilson – a business owner – emphasized being a resident of Clark County since 2007.

“I’ve got to meet a lot of business owners, and that’s where I want to be focused,” he said. “I’d like to be able to focus on bringing residential and business development to Clark County and to the 6th District. I’m a fiscally conservative Republican and [will] definitely be responsible with your tax dollars.”

The first question both candidates asked was what their single greatest priority is.

“Being a business owner for 20 years, I would like to be able to bring that to the Fiscal Court and be able to help bring more business to the community,” Wilson said.

“There’s really not one priority,” Blanton said. “There’s so many different things that all intertwined together with few exceptions.”

Both candidates gave relatively short responses when asked to provide a pro and con regarding industrial solar.

“From what we’re told, solar is renewable energy. That would be the pro”, Blanton said. “I think the con would be we’re using valuable farmland that could be used for many other purposes besides the solar panels, so it’s a difficult thing to balance.”

Blanton acknowledged that building and property owners have rights.

Asked if he would support a county-wide policy to implement fair housing for landlords in Clark County, Wilson said he was not in favor of it.

“I think capitalism is where we would be able to get that done,” he said. “I believe that growing residential development would definitely grow more housing and that it would bring down rental prices for those that were looking for rental properties.”

While Blanton acknowledged affordable housing to be an issue, he also said controlling it through a county-wide policy would be ineffective.

“What you have to have is growth and development to bring more housing or housing to bring down the cost,” he said. “My grandfather even went before the City Commission to protest the rent controls in Winchester, so I’ll be like my grandpa.”

Last, both were asked to project Clark County over the next four years.

“Clark County is only getting better,” Blanton said. “We just need to realize it ourselves.”

He pointed out recent developments, such as broadband and work done by the Winchester Industrial Development Authority, while suggesting more jobs and population.

“I’d like to be able to see an easier environment to grow business,” Wilson said. “We need a population here in Clark County that will attract businesses to come here.”