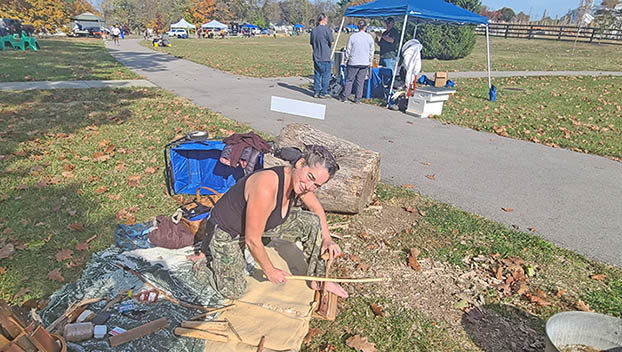 Primitive fire-making was one of the many skills shared on Saturday. (Photo by Warren Taylor)

Saturday was a lovely day to learn a skill in Winchester, and the place to do it was at Legacy Grove Park.

The park hosted its first-ever Fall Skillshare from 10 a.m. to 2 p.m. The event was the idea of the park’s program director, Hope Broecker.

“I’ve been part of a few skillshares in the past at different locations and wanted to bring it to Legacy Grove Park,” said Broecker. “It is a great way to engage and empower the community, and create cross-educational sharing.”

“Unlike a vendor-focused, sale-based event, it is more about multi-generational skill sharing so that you can preserve the knowledge…It is really about strengthening communities,” Broecker said.

Various community and regional organizations were in attendance to impart knowledge on those that wanted to learn, including: Bluegrass Greensource, the Clark County Public Library, Kentucky Riverkeepers. Treehouse Compost, and the Wolfe County Search and Rescue Team.

Attendees had the opportunity to learn everything from axe throwing to primitive fire-making.

Clark County resident Leila Garrett was on hand to teach the art of bow-drill friction fire-making.

The process begins with an individual using a bow to rub a spindle against a fireboard or a piece of wood to create enough ash to make coal.

“Then with that coal, you can blow it into a fire if you have a tinder. It is a way of bringing fire out of nothing,” Garrett explained.

And while the process may not be as essential to human life as it was many millennia ago, friction fire-making is an excellent tool for getting in touch with nature.

“You come to know the woods,” Garrett said. “You have to know what is happening with the weather and which way the wind is blowing.”

It is also an exercise in critical thinking.

Garrett has always had a fascination with the old ways.

“I have a long-standing interest in primitive skills,” she said.

As Garrett builds a fire, she often sings an original song she wrote to celebrate the first time she succeeded in creating one, thus melding artistic and natural creation into one.

For anyone who ever wanted to know about wild mushrooms, Josh Yates and Neelun Lew of the Bluegrass Mycological Society were in attendance to teach people about fungi of all shapes, sizes, and colors.

“Fungi are everywhere. They are growing in the soil, the trees, in animals, and in us and outside of us,” Lew said. “They make beautiful color displays, delicious food, and potent medicine.”

The pair said they spent most of the event explaining the basics of identifying mushrooms, which species are toxic, and how to prepare mushrooms for cooking.

It is not currently known how many species of mushrooms exist in Kentucky, and according to Lew, biology is “several hundred years” behind in fungi study.

That is why the mycological society encourages anyone curious about mushrooms to submit questions and photos to various naturalist websites.

The society also aims to clear up misconceptions about mushrooms.

“There is a big stigma that I heard as a kid, ‘Don’t touch that! It is poisonous and will kill you,’” Yates said, adding that for the most part fungi are safe. “There is not one species of mushroom that you can touch or taste that will kill you.”

Yates added that most mushrooms need to be cooked before they can be eaten and that hundreds of edible species exist in the commonwealth alone.

Whether one learned to spot an edible mushroom or to build a fire, the skillshare succeeded in enriching Clark County’s collective mind.