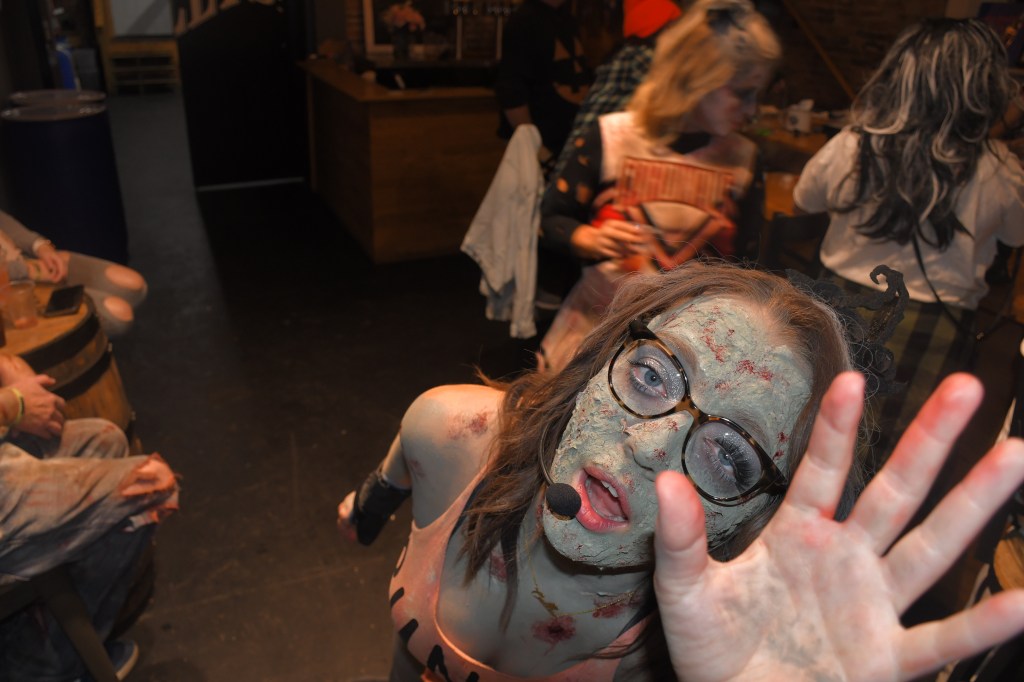 Participants came dressed and made up as the walking dead for the second consecutive year. (Photo by Matt Cizek)

Business is booming on Saturday nights in Winchester, and this past weekend it featured a cast of ghoulish characters.

“The chamber of commerce strongly supports this because it gets people from other communities,” said Cindy Banks, the executive director of the Winchester-Clark County Chamber of Commerce. “Probably 80% of the folks here are from another county.”

The event started at approximately 7:00 p.m. as attendees gathered outside of the Clark County Courthouse.

Encouraged to dress in zombie-like attire, face paint was common among those present, as were hairstyles of multiple colors.

While some dressed as particular characters – such as a firefighter or a cheerleader – others came wore every day outfits to the event.

At the courthouse, guests were gifted several items, such as a t-shirt, wristband, and sticker. Goodie bags with chocolates and other treats were also handed out.

The group started their adventure by going to Loma’s at the Opera House.

There, in a play on words from the lines of Shakespeare’s “Macbeth,” they had the choice of a drink called Toil & Vodka (a mix of apple cider and ginger ale), as well as Trouble (seasonal sangria).

“We love seeing all our patrons, new and old, come in here and dressed up, and we just serve them some drinks and enjoy the night,” said Marilyn Keefer, a bartender, and server at Loma’s. “It’s just an enjoyable time for especially adults because we don’t get to play dress up as much.”

Afterward, the group made their way to the newly opened Main Street establishment, The Hall Coffee and Social Club.

While the business does not yet have a liquor license, visitors were given an early tour.

“We’re new to Winchester and wanted to see what the community was like, and we’ve been really enjoying that,” said owner Jason Hall. “Our big goal here is community.”

The group would shortly thereafter make their way to La Trattoria, where drinks would be decorated with black and white sprinkles in the spirit of Halloween.

As they made their way from one location to the next, music would accompany them.

Before going to Abettor Brewery, where they would hear the appropriately-named song “Zombie” by The Cranberries,” the group joined in momentarily with the GRC Class of 1982’s reunion that took place along Depot Street.

After taking time to enjoy the offerings of both Wildcat Willy’s Distillery and Micki’s Irish Bar, the group would end the night at Engine House.

For some, it was a first-time experience.

Jesse McCoy, a construction superintendent with Spectrum Contracting Services, was present for the first time with his fiance Megan and other family members.

“It’s a good environment. Everybody’s doing good,” he said. “This is a family event. It’s a networking event. You may speak to local business owners and be able to foster some good relationships.”

In her second-year experiencing the event, Banks concurred.

“I’ve met so many people saying, ‘We’ve never been to Winchester. We love this. Can we come back again next year?’”, she said. “We want people to move here and support our community.”