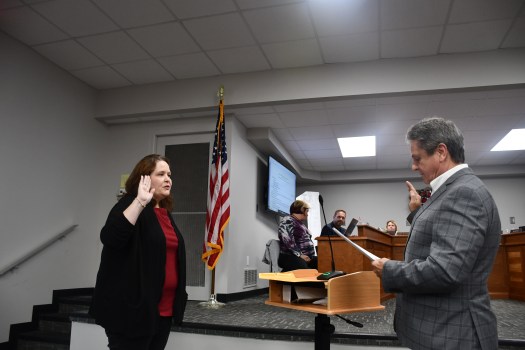 Dora Hall was officially sworn in for her seat on the board of education Tuesday by Judge-Executive Henry Branham. (Photo by Warren Taylor) 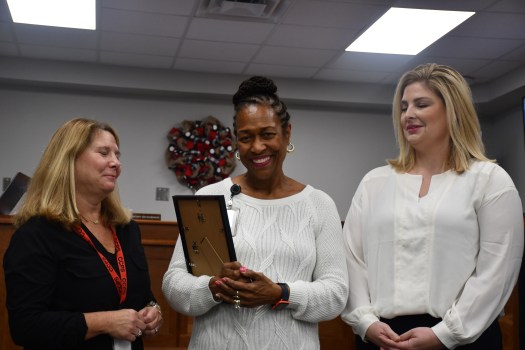 The board said a special goodbye to Arlene Nance on Tuesday. (Photo by Warren Taylor)

Judge-Executive Henry Branham swore in Dora Hall before her family and friends.

Hall replaces Brenda Considine, who resigned from the seat in July. She was appointed by Kentucky Education Commissioner Jason Glass last week after the board asked the state to make the appointment in September.

In a previous interview with the Sun, Hall said that she is a lifelong Clark County resident. She and her husband, Chuck, have one son, Noah, a sophomore at George Rogers Clark High School.

She is currently employed by the National Youth Advocate Program as its foster care program director and is a licensed clinical social worker.

Hall has pledged not to be a stranger in local schools.

“I will be active in attending functions,” she previously told the Sun. “I have good relationships with the schools because I used to provide therapy in them…I am here to listen and be available to people if they are having issues, and will help guide them in the direction of resources that they might need.”

The board also heard a presentation regarding the district’s performance on the Kentucky Summative Assessments.

The results differed this year from what was previously a 5-star system.

The new accountability system provides a color-coded rating for all schools at each level ranging from red (lowest) to blue (highest). Each school system receives a color coding for elementary, middle, and high schools.

“This is a new accountability system with new norms, and we are transitioning from in a pandemic to kind of in a pandemic to what we hope is post-pandemic,” said Superintendent Dustin Howard during a recent phone interview.

So how did the district do?

The district was in the yellow category across the three levels of schools, which is in the middle of the scale.

The assessment results did not shock Howard.

“This is not a gigantic surprise to us. We assessed our kids throughout the year,” he said. “We are now looking at where our kids are in the fall compared to the spring, and we have done some screenings with reading and match for every student in the district.”

Much has been made in state and national headlines about gaps in learning coming out of the pandemic, where distance and restricted learning were the norms. Clark County was no exception.

The board took time to honor the retiring Arelene Nance.

Since 2009, Nance has served as the administrative assistant to the superintendent.

As part of the small ceremony, board chair Megan Hendricks read a proclamation regarding her service from the Kentucky Senate.

“I always tell people when we talk about Ms. Nance that she is a professional until the end, and it has never waivered from that since I have known her,” Hendricks said.

A smiling Nance expressed her gratitude to the board.

“Thank you all for everything. It has been a pleasure working with you,” she said.