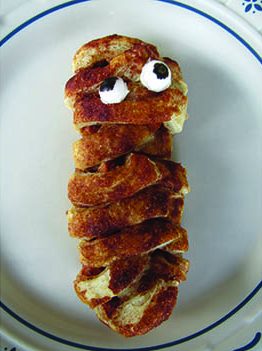 A spooky and delicious treat! (Photo by Sarah Condley)

With Halloween around the corner, I knew I had to try making these little mummy tarts as soon as I saw them in a Kroger advertisement I received in the mail.

I added apples and puff pastry to our grocery list and sugar googly eyes. When I arrived home, I put the puff pastry in the refrigerator so it would thaw. The next day I gathered all the ingredients, peeled and chopped the apples, added the lemon juice, brown sugar, nutmeg, and part of the cinnamon, and set the bowl aside.

After lining two cookie sheet pans with parchment paper and laying the portioned-out puff pastry on top, I cut each of the two pieces of pastry into four squares and separated them – for a total of eight squares. Then I cut an equal number of strips on both sides of each piece, leaving a strip of dough down the middle. After cutting strips on both sides of each puff pastry, I portioned out the chunky apple mixture, putting it down the center of each piece of dough.

Folding up the strips over the apples was a breeze, and you don’t have to be precise about it – messy makes the finished mummies look more like mummies. Once I’d brushed the egg over each, I combined the remaining cinnamon and sugar and sprinkled it generously over the top of each mummy. The pans went into the preheated oven, and in 15 minutes, they were all a nice brown color. Out of the oven, they came. Once they cooled, I added the googly eyes.

The recipe didn’t say how to get the googly eyes to stick. If I’d left more apple filling showing in one spot, they might have stuck, but since I didn’t, I used some canned icing I had in the refrigerator, which worked perfectly. They were in place with a bit of a dab on the back of each eye. I stepped back, looked at the mummies, and thought, “They do look like mummies.”

That evening after supper Brad and I, along with some family, were ready to try our Halloween treats.

After a few bites, we discussed how we liked the mummies. Brad said he wished they were a bit juicier, and another person thought they needed more apples. I thought the cuteness outweighed the taste.

These Mini Apple Tart Mummies fall into the “Nailed It” category as a cute sweet treat. If you are having a Halloween-themed party, these cute mummies may be just the thing you need to serve. They really don’t take much effort to prepare.

• Place generous spoonful of apple mixture evenly down center of each square.  Alternate folding strips diagonally across middle, leaving opening near top for eyes.  Pinch dough together at bottom and top seams to close.

• Brush egg over each mummy; sprinkle with remaining 1 teaspoon cinnamon and granulated sugar.