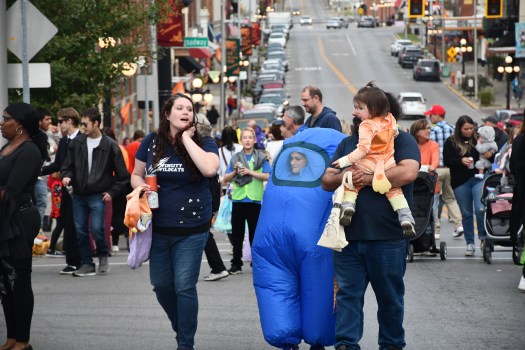 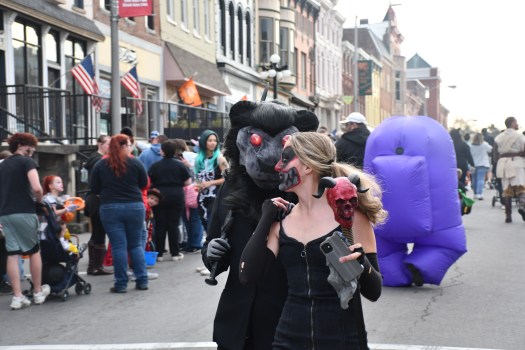 The young and young at heart got into the Halloween spirit on Saturday. (Photo by Warren Taylor 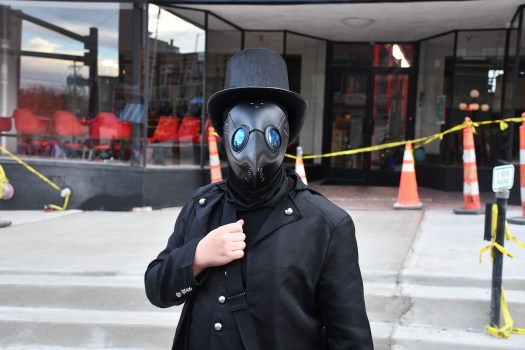 A plague doctor costume is certainly timely during a global pandemic. (Photo by Warren Taylor) 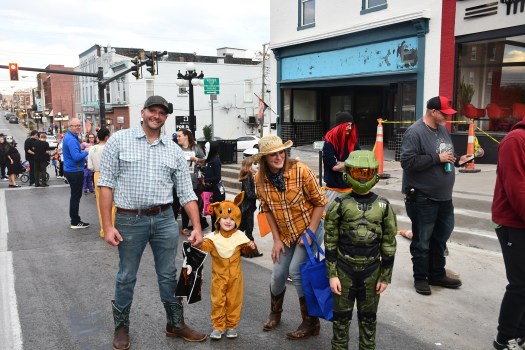 An Evee and the Master Chief for all local videogame fans. (Photo by Warren Taylor) 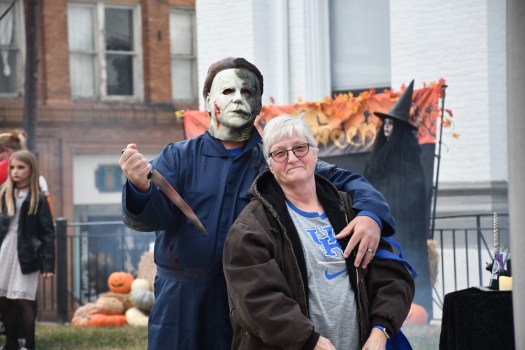 Was she in trouble? We hope not! (Photo by Warren Taylor)

A large crowd of ghosts, goblins, and other unique creatures filled downtown Winchester on Saturday night for Halloween Main-ia.

The event was held at local parks with a drive-thru component for the last few years due to the COVID-19 pandemic.

Still, Jennifer Wilson, owner of Eve’s Uniques, and Cameron Correll of Winchester Design Studios helped organize the event and were astounded by the turnout.

“Oh my gosh!” said Wilson. “I think the crowd is double what we expected.”

The event featured close to 40 different groups, organizations, and candidates for office lining Main Street and handing out candy.

“We also have small-time carnival games. Beta Club and cheerleader volunteers are manning those,” Wilson said. “We have inflatables. We have BCTC handing out popcorn, and we have got Kentucky Farm Bureau handing out hotdogs.”

The night’s highlight was the 7 p.m. costume parade around the Clark County Courthouse Square.

Making sure the event went off without a hitch was quite an undertaking. Luckily there were plenty of volunteers to help out.

Wilson said that Main Street Winchester, the city of Winchester, and the Clark County Fiscal Court contributed funding for the event.

The crowd’s excitement was not lost on the event’s organizers.

“It is amazing to see this many people come out and see what we have to offer downtown,” Wilson said.

Anthony Pettyjohn brought his daughter to the event to make some family memories and came away impressed with the festivities.

“I think it is pretty cool. It is awesome that they put this together for the kids,” said Pettyjohn.

And after a few socially-distanced Halloweens, Pettyjohn said it was nice to see the world return to a sense of normalcy.

“It’s really nice to be able to come out and see everyone coming back together as a country,” Pettyjohn said.

Ashley Johnston agreed with that sentiment.

“I feel like we have some of our freedom back,” Johnston said. “The freedom to move around and not be stuck at home all day.”

Johnston came dressed as Chrissy Cunningham from the television show “Stranger Things,” and it delighted her to see others get into the Halloween spirit.

“Seeing everyone in their costumes having fun has been awesome,” Johnston said.

Logan Hammer – dressed as the infamous Beetlejuice – volunteered to help out at the event.

“I love helping the community and giving back. It is just fun,” Hammer said. “Winchester is my town. I love it here, and this is a great way to give back to the community.”

Hammer was also impressed with the turnout for the event.

“Only in Winchester,” he said.