Halloween goes to the dogs 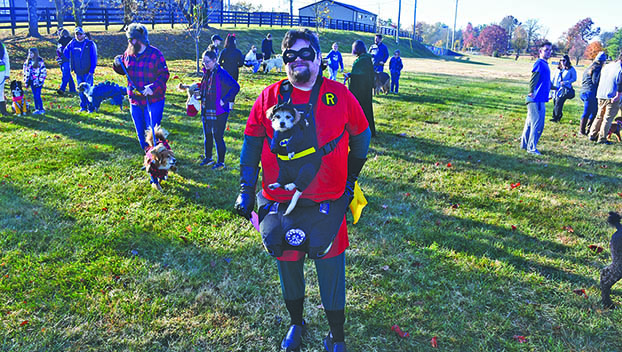 Halloween is typically reserved for kids and others who like to go trick-or-treating or celebrate otherwise.

However, you wouldn’t know it due to what occurred Saturday morning at Legacy Grove Park.

Over 60 dogs entered a costume contest, and many others were present in and around the area at the first-ever Howl-O-Ween Fest! – Dog Costume Parade & Contest.

“We wanted to do something for the dog park,” said Hope Broecker, the program coordinator at Legacy Grove. “We actually had regular dog park people come to us and say, We want to do something really special.’ They came up with this idea, and we just kind of ran with it.”

The event started at 9 a.m. and allowed individuals to register their dogs for the costume contest.

As one can imagine, the entrants featured a wide variety of noticeable attire.

Furry friends were dressed as a bumblebee, a pirate, an octopus, an angel, a dragon, a UK football player, a clown, and more.

In some cases, pairs dressed accordingly.

Two Shelties were dressed as Little Red Riding Hood and the Big Bad Wolf, while one owner dressed as Buzz from “Toy Story” opposite their dog dressed as the character Woody.

Some even wore costumes that played on words, with multiple in a sports official’s outfit calling themselves a “ruff”-eree.

While the former wore an orange outfit with the words “lick or treat,” the latter was in a purple outfit that read “Official Treat Inspector.”

“When we first got our [dogs], we wanted them to be super social,” said Alan Roberts. “Every weekend, from the time we got them, we would have them out in public around people and other dogs. These guys love coming to dog parks and playing.”

While the event’s highlight was the costume parade, other opportunities were in store.

People could take photos with their canines at a photo booth.

Michelle Kelly and her daughters Alex and Kennedy were present and took photos with their German Shepherds Bean and Mango. While Bear was a dinosaur and dragon, Mango was half unicorn.

“[Bear] came from the West Jessamine Animal Shelter last year…I got [Mango] during the COVID pandemic,” Alex Kelly said. “There’s a lot of people here. I just really enjoy the event. It’s good for the community.”

With Legacy Grove looking to support businesses, many were present.

Pet-related businesses such as The Crazy Dog Lady, A Diamond in the Rough, Consummate Canine, Inc., Teddy and Friends Dog Boarding, Almost Home Pet Boarding, and more were there.

“We wanted to get awareness out of what we do about rescuing…dogs and finding good homes”, said Dawn Little, a staff member at FairyTails Pet Adoptions. “We want to encourage people to adopt, and if you’re going to get a dog from a breeder, make sure it’s a reputable licensed breeder.”

In the end, the winners of the dog show event were voted on in four different categories.

Teddy, a miniature poodle, was named the funniest. A group of four Yorkshire Terriers named Thacker, Thor, Thatcher, and Thug were named Best Couple. Tiny, an unidentified breed, got named the Scariest. Maggie Mae, a crossbreed between a Shih Tzu and Yorkshire terrier, was named Best in Show.

However, the event left something for all dogs and dog owners to take away.

“This was our most excitable event that we’ve ever had,” Broecker said. “Social media-wise, we’ve gotten a lot of engagement. Any time we can engage the community and something different as a park…that’s what this is all about.”