Couch says there is a lot to love about Levis 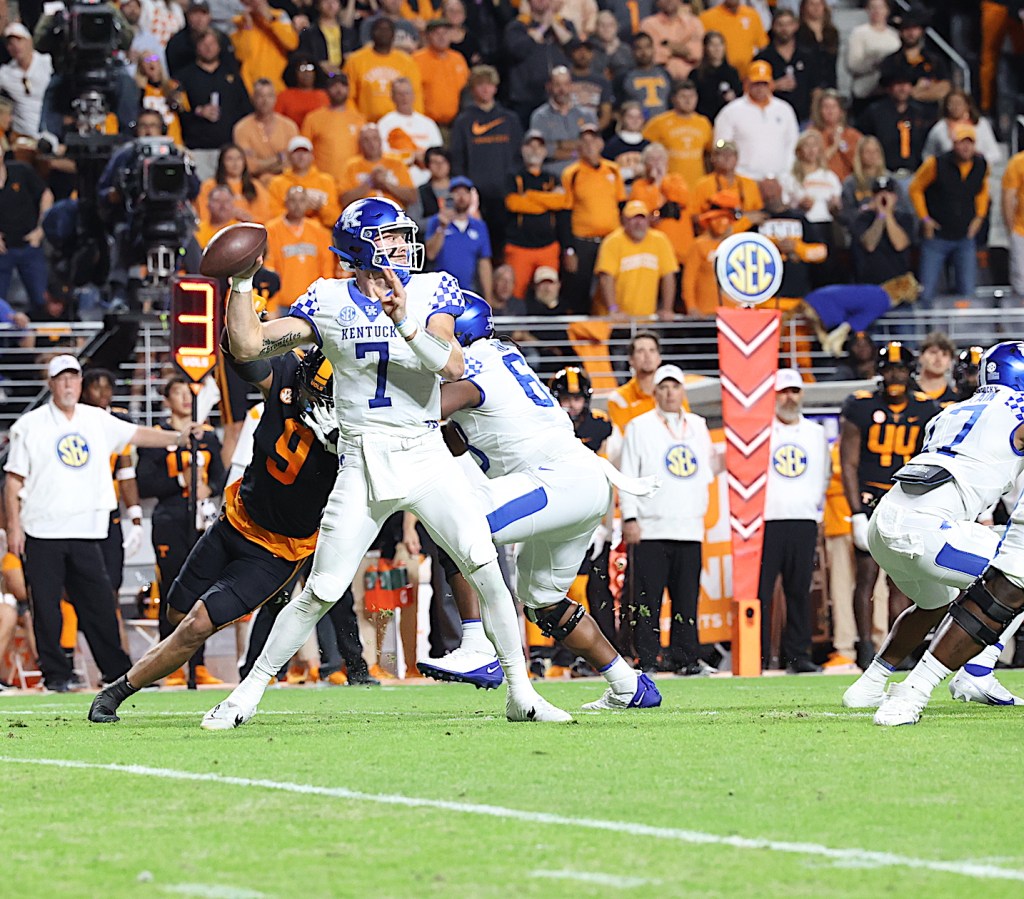 Will Levis will impress NFL GMs, according to UK great Tim Couch. (Photo by Vicky Graff)

Will Levis will not win a numbers game with quarterbacks like Bryce Young of Alabama, C.J. Stroud of Ohio State, or Hendon Hooker of Tennessee, especially after throwing for only 98 yards in the 44-6 loss at Tennessee.

But those other quarterbacks play faster and usually get more plays per game for the quarterback to put up numbers. Levis has also taken a physical beating this year and did again at Tennessee when he was sacked five times and pressured a lot more.

Levis dislocated a finger, took a hit to the head, and injured his foot at Mississippi, which led him to not playing against South Carolina. He took a shot to his left shoulder — his non-throwing arm — and briefly left the game against Mississippi State before returning to lead UK to a win.

Former Kentucky quarterback Tim Couch, the No. 1 pick in the 1999 NFL draft, knows what it is like to play hurt because injuries cut his NFL career short.

“There’s no question it affects your play, but Will is a different kind of guy. He is as tough as they come,” said Couch before UK lost at Tennessee. “He has been able to play through it, and his production has not really dropped off at all.”

“He is probably not running the ball as much as he was towards the end of last year just because he can’t take any more hits than what he already is in the pocket. He is just a warrior. It takes a toll on you as the season goes on.”

Couch said one specific hit cannot impact a quarterback’s performance. Instead, it is the hits that just keep coming.

“Even as big and strong as he is, you keep taking those hits, and it just takes that one hit like the one against Mississippi State where you land on your shoulder wrong, and it can be over,” Couch said. “Thankfully, it was his left shoulder and was not as serious as it could have been. But it just takes one to get you.”

ESPN draft analyst Todd McShay told The Sporting News that Levis’ draft value would “rise” after the season ends when he starts the pre-draft process with NFL teams.

“He’s that special of a dude,” McShay said. “He’s going to have to work on pocket presence and feeling where pressure comes from. It’s great to have his mobility, but if you’re not always feeling it when things start to collapse around you when you’re inside the pocket and it gets kind of frantic, then you lose that poise and calmness. He’s not allowing himself to utilize his athleticism as much in those cases.”

Couch, who led UK to the 1998 Outback Bowl, says he was impressed with Levis last year after transferring from Penn State, even though it was his first year as a starter. His opinion is a bit different than McShay’s.

“At Penn State, he was used more as a running back, basically. He has learned two systems since he has been here (under Liam Coen and Rich Scangarello), which is very impressive because that is two NFL systems,” Couch said. “He has improved a ton. I see his accuracy has improved, his footwork and patience in the pocket is better.

“He is not looking to get out there and run as quickly as he did last year. He is letting things develop and is anticipating throws better. He just is in total command of the offense despite the pressure he’s been under. I am extremely impressed with him. I think he is certainly a very high first-round draft pick if he continues down the road he has been on this year because NFL scouts look at a lot more than just your numbers.”

Couch knows it is Levis’ natural instinct to run, especially in big games, because he’s done it his whole life.

“I am sure they are preaching to him that his body is too banged up right now, and if you do run, do not look to run over people, or hurdle people like you did last year. Just get the yards out there, get a first down and get out of bounds or slide. You just can’t take any more hits than he has already taken, but it goes against who he is,” Couch said.

“When he runs, he thinks he is going to run over somebody or break a long run, and he does a lot. But this year, he has to process that differently and realize the most important play is for him to be in the huddle for the next play. He has to play a little more cautiously than a year ago, and that lesson will help him in the NFL.”

“I think in today’s world where guys who are projected first-round draft picks and then they start getting beat up a little bit toward the end of the season, these guys don’t play in bowl games,” Couch said. “Will, in my opinion, is an old-school type of guy. He is going to be out there battling and just won’t abandon his team.

“I know there are a lot of GMs who love that. They love to see that competitiveness out there. It just demonstrates great leadership. When your quarterback is willing to play through injury, it motivates everyone else that they better be out there.

“If this guy is going to be a first-round pick and make millions of dollars, and he is laying his body on the line for his team this year and not worried about his future, but just this season, NFL scouts just love that as much as they do big numbers.”