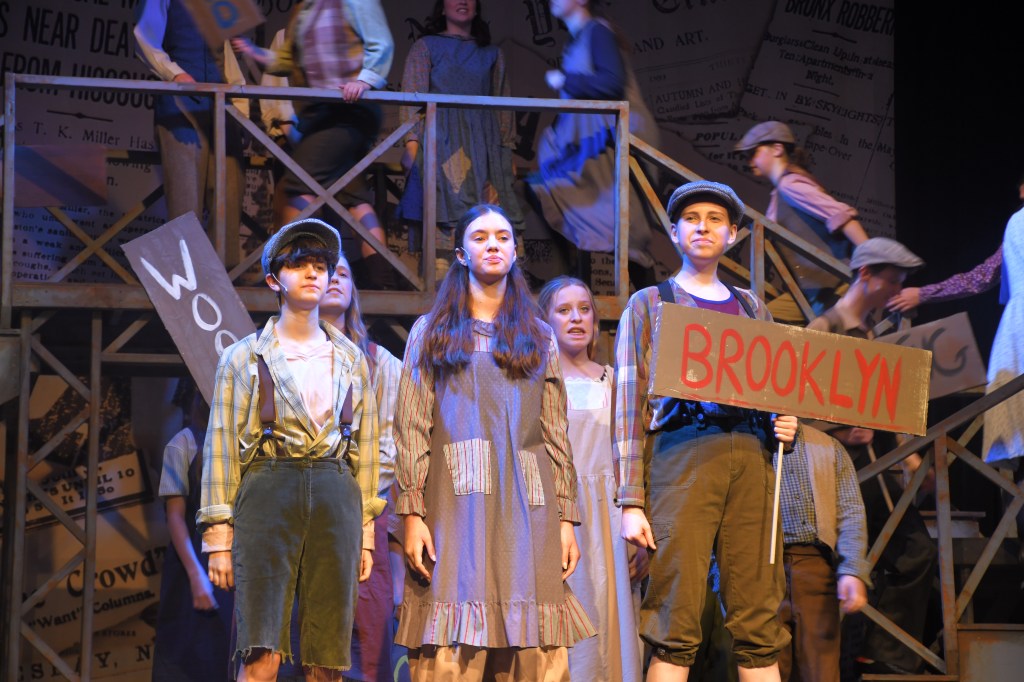 Newsies JR., is a fictionalized account of the 1899 newsboys' strike in New York City. (Photo by Warren Taylor)

The Leeds Center for the Arts presents a turn-of-the-century adventure in Newsies JR., this Friday in downtown Winchester.

Based on the newsboys’ strike of 1899, the show is an adaptation of the 2012 Broadway musical tailored explicitly for young performers and tells the tale of a group of young newspaper hawkers forced to fight for what they believe is right against some of the most powerful men in New York City.

Several members of the cast are from Winchester and Clark County.

“My character is a funnier character. He is really, really goofy,” Owen said. “He is self-centered because there is a picture of all the newsies on the front of the newspaper, and he sees himself, and he goes, ‘Well, I’m famous. Let’s have a party.’

While Owen’s character is a lark, his world is nothing to sing about.

“It’s honestly a sad world that all of them live in,” Owen said about New York City in 1899. “There is child labor, and they are making him [Race] work, and they are not paying him.”

Fourteen-year-old Campbell Junior High student Wyatt Jackson has a supporting role in the ensemble and said the cast learned about the era’s history to prepare for the show.

“We had multiple sessions where we studied New York in 1899,” Jackson said. “We learned about the boroughs and the actual papers…What I like about that time period is that technology was getting advanced, but they still took tradition and family pretty seriously.”

As part of the ensemble, Jackson supports the main cast with his singing and dancing but relishes the artistic freedom being a background player gives him.

“It is fun being in the ensemble because you can make up your story because it is written on paper. So you get to choose how your individual character gets to act,” Jackson said.

So what spin did he put on his character?

Well, Jackson described him as a “sassy and enthusiastic” person who is “larger than life.”

Raegan McCormick is 14 and goes to school at RDC. Her character Nancy is part of the show’s ensemble, and she gave some insight for why the characters go on strike.

“They are going on strike because they raised the price of the papers, and back then, ten cents – which may not seem like a lot to us – was a lot to them. It would be like $100 for us,” McCormick said.

McCormick said she imagined Nancy crossed the picket line because that money could easily buy her enough to eat.

The newsies’ will to fight for a better way of life is inspiring to McCormick.

“Their right to stand up for what they believe in and the confidence it gives them,” she answered when asked what she admired about the show’s setting.

Will the newsies’ strike succeed? Find out by Friday!

Tickets start at $15 for students, are $18 for adults, and can be purchased online at www.leedscenter.org/event/newsies-jr.