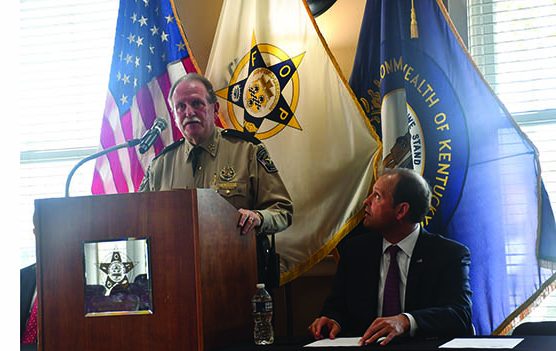 Immigration and the ongoing opioid epidemic in the United States are critical issues in the 2022 general election. Congressman Andy Barr held a news conference to address both last Wednesday at the Fraternal Order of Police in Lexington.

At the event, Barr was joined on the stage by Clark County Sheriff Berl Perdue – the Fraternal Order of Police’s state president – which centered around fentanyl and law enforcement’s fight against it.

According to the U.S. Drug Enforcement Agency’s website, fentanyl is “ a synthetic opioid that is 50-100 times stronger than morphine and was originally “developed for pain management treatment of cancer patients, applied in a patch on the skin.”

The drug is often mistaken for heroin and is increasingly associated with many overdose deaths.

Perdue said that the Clark County area “is on the fringe” of the state’s trafficking hotspots and sometimes does not get as much publicity as the rest of the state.

The sheriff said four years ago, he warned in a campaign advertisement for Barr that issues of drugs and criminals coming over the southern border was “a crisis.”

The situation has deteriorated, according to the sheriff.

“It is worse now than it has ever been,” Perdue said. “I never could have predicted four years ago, moving forward, how much worse it could be.”

The influx of drugs has had a tragic consequence for Kentucky.

Barr lamented that – in his opinion – President Joe Biden’s border policies have let enough fentanyl into the U.S. to kill “every man, woman, and child in America seven times over.”

He declared the epidemic a “chemical attack against the American people.” He claimed that the ruling Communist Party in China was manufacturing the drug and working with Mexican drug cartels to push the project into the U.S. heartland.

Barr said that seventy percent of all overdoses in Kentucky in 2022 were connected to fentanyl.

To keep the drugs out of the community, Barr said that Congress needs to pass legislation that will provide more funding for law enforcement at the border, change the vetting process of immigrants coming into the United States and make fentanyl a schedule one narcotic.

Perdue was complimentary of Barr’s support for local and federal law enforcement in the fight to stop the flow of drugs into local communities.

“Congressman Barr is a stalwart for law enforcement,” Perdue said. “He is our cornerstone. He fights for us every day and has for the last ten years in Congress. He has been there for us from day one. He is the best.”

Besides local law enforcement, the three-county area has a KSP trooper and part-time U.S. Drug Enforcement Administration agent assigned to it.

“They are very effective and go hand-in-hand. It has been very successful for us,” Perdue said.

While HIDTA has helped keep drugs out of Clark County, Perdue said there is still an issue. He explained that once the drugs come into the U.S. from Mexico, they are transported to large cities such as Detroit and then work their way southward.

The most dangerous thing about fentanyl is how little of the drug it takes to cause someone to overdose.

“It takes only a couple of grams or grains to kill someone,” Perdue said. “It is something we have never seen before. Of course, it is a synthetic narcotic.”

The sheriff said that when his law enforcement career began, the drug of choice was heroin, which is the case now, but mixing it with fentanyl has elevated the crisis to its current level.