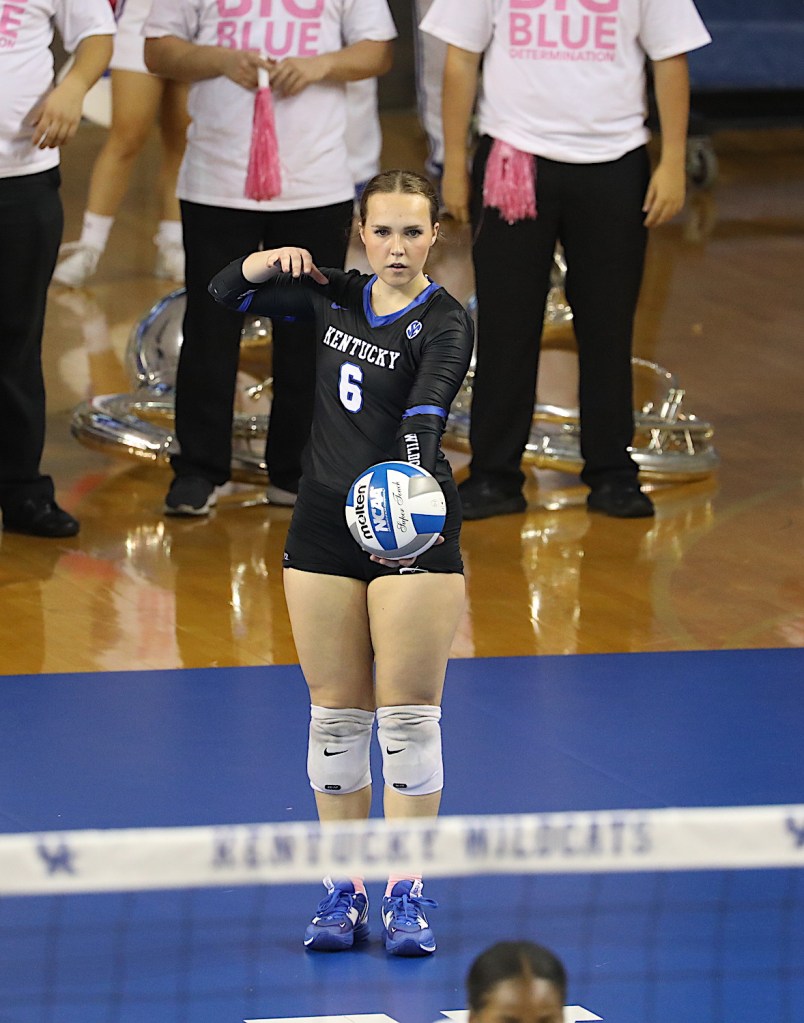 She was the Southeastern Conference libero of the year and a member of the SEC all-freshman team in 2021, but Eleanor Beavin admits she was not ready for the way her freshman season ended.

Kentucky, coming off a national championship season, lost at home in the second round of the NCAA Tournament to Illinois 3-1. Looking back, Beavin admits the team was probably too overconfident going into postseason play.

“I think we came in knowing they had won the championship the year before and we came in not as focused and prepared thinking the first and second rounds were at home and this would be a breeze,” said Beavin. “Defending champs … we got a little ahead of ourselves for sure and got the wind knocked out of us in the second round. A lot of disappointment for sure.

“This year, especially since we have already had a lot of losses that we learned from compared to last year, I think we will go in more hungry and be a lot more focused. We are expecting better results and know we should get better results. We are ready to erase what happened last year out of our memory.”

Kentucky is 15-6 overall and 10-2 in SEC play going into a match this week with Mississippi State before hosting Tennessee Nov. 16. Next will come matches at SEC leader Florida Nov. 19 and 20 that could decide the conference winner.

Kentucky has lost to some of the nation’s best teams — Wisconsin, Louisville and Nebraska — this season and Beavin knows when postseason play begins in December that the Wildcats will have a different postseason mentality.

“Not that we were not humble last year, but it’s just when you are the defending national champion, no one expects you to go out in the second round. We didn’t think it was even a possibility,” she said. “So when we got down, it was like, ‘Oh crap. This team can’t beat  us.’ But they did.

“This year we have that expectation that it doesn’t matter who we are playing or whether we are ranked or not, we are going to go in prepared like it is a national championship match from the start.”

Beavin played at Mercy High School in Louisville where she was a defensive standout and all-state player. Four times her team got to the state championship game. Each time, Mercy lost.

“We could never quite win it all in high school. Last year winning the SEC was super special but I definitely want to win a natty (national championship),” Beavin said. “Every year in high school we got closer and closer (to winning the state). We lost by two points in the fifth set my senior year and that is definitely something that has always stayed with me and coming to college I wanted to change that. I definitely want to win a championship here.”

Kentucky has become Libero U. under coach Craig Skinner. Starting with Jackie Napper in 2011 and then Ashley Dusek followed by Gabby Curry, Kentucky had the SEC’s best liberos — a streak Beavin continued last year with her play.

Curry, a three-time SEC libero of the year from 2018-20, has been a “bit of a mentor” for Beavin. The UK sophomore knew plenty about the history of UK volleyball since the Louisville area produces a lot of quality liberos.

“It’s like Libero U. here at Kentucky. We win (SEC) libero of the year all the time and it’s not by sheer luck. We train it. We have the mindset going in that we are going to win it.,” Beavin said. “As a freshman last year I had the mindset I never doubted I could win the award because it is the history here. A player respects the history here and that is a big reason why I came here. I knew they would train me exceptionally well.”

Beavin didn’t assume she would be the next Gabby Curry but she thought it was a “possibility” she could be that successful if she put in the work.

“I knew I had the ability to be the libero if I worked hard enough and luckily that did happen. We have extremely talented players on our team who push me every day and I think that is why our team gets better because our passing is insane,” Beavin said.

Because Beavin was not the opening match starter in 2021, she knows her play surprised a lot of people and probably had doubts about her.

“That was a totally fair assumption but I love proving people wrong. I have done it my entire life. I love when people have that expectation of me and then see I can do it. I don’t think people have that assumption any more about my play,” she said.

“I just feel like I am very composed when I play. I don’t let things rattle me. I have a really good knack for the game. I have the ability to kind of run the entire backcourt because I know the responsibilities of my job. I just know the game very well and that translates to my play.”

Beavin has also become much more talkative on the court this year. She would defer to older players last season and admits she was a bit “tame” last season.

“I know the game and feel like people definitely trust me now in my position, so I feel like I have the ability to step up in my position and just talk a lot on the court to help my team,” Beavin said.