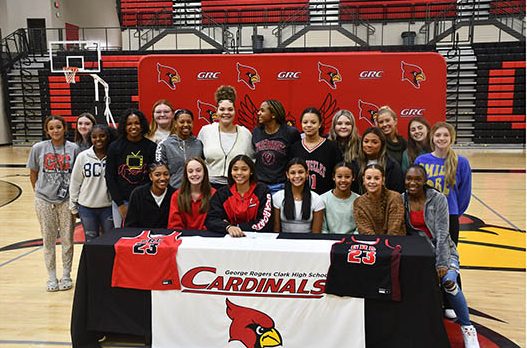 Even with one eye on the future, Byars said her high school career would not be complete without a state title. (Photo by Matt Cizek)

The University of Cincinnati has become known for its football team recently.

“It was more of a home feeling. I definitely knew they had a plan for me and what I wanted to accomplish going into my college years”, said Byars, who had previously courted offers from other schools, including Eastern Kentucky University, Tennessee Tech University, and the University of Tennessee at Chattanooga. “They checked off all the boxes that me and my family had planned out for myself, and it was just the fit.”

The signing ceremony had an assembly-like feel, as a table located at the front was filled with Brianna, her sister, fellow GRC basketball star Ciara Byars, Brianna’s parents, and others.

To their left, coaches for GRC sat in unison.

As the bell rang and the ceremony was preparing to begin, several students – including athletes from fellow sports such as football, baseball, and soccer – gathered to watch.

And, of course, teammates from the GRC girls’ basketball team were the first to arrive.

GRC girls’ basketball Head Coach Robbie Graham, who has had the luxury of having Brianna on his roster since she was in eighth grade, spoke early on.

“Any time our players continue to reach their goals and their dreams at such an early age… It’s a very exciting time for our fans but also for our basketball team”, he said. “I just want to let her know how proud we are as a program. It’s been a blessing to coach her, and [I am] looking forward to this year.”

Brianna also had family members speak, including a close relative, and sister Ciara.

“I’m just proud that you got a scholarship to play somewhere that you want to be and a place that you love,” she said. “I’m just glad that everything paid off.”

Brook Taylor, a teammate of Byars, mentioned that her influence went beyond the court.

“Thank you, Bri, for not just being the best teammate but being a friend…on and off the court”, she said.

After the formal ceremony, fellow friends and family members showered Byars with appreciation.

The University of Cincinnati girls’ basketball team, under Louisville native and former Western Kentucky University Head Coach Michelle Clark-Heald, will look to improve upon its 11-17 record from last season.

Its strongest season in recent memory, a 22-win 2019-20 regular season, saw its postseason opportunity canceled because of the COVID pandemic.

“I went there for my official visit and loved [the] campus, loved how they lived their lives,” Byars said. “From day to day, they’re taken care of really well… it’s just going to be a fun experience.”

Presently, Byars hopes to end her senior season on a high note.

“I definitely don’t want to go out sad. I need a state championship before I leave”, she added.