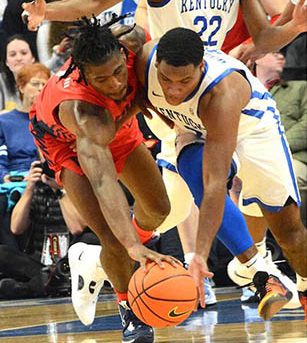 Wheeler had a double-double with 11 points and 11 assists to lead No. 4 Kentucky to a 77-52 win over Duquesne in his first official outing of the season. Wheeler missed one of two exhibition games and sat out a season-opening victory over Howard on Monday night while nursing a re-aggravated knee injury.

“Sahvir did good,” Kentucky coach John Calipari said. “He played more minutes (27) than what I wanted to play him…I did not think Sahvir played as many minutes as he played.”

The Wildcats (2-0) were without All-American forward Oscar Tshiebwe, who has yet to make an appearance this season after undergoing minor knee surgery last month. Daimion Collins, also an experienced veteran, missed his second game because of a death in the family.

Calipari didn’t offer a timetable for Tshiebwe’s return but added he’s inching closer to getting back on the court. Tshiebwe warmed up with the team Friday night.

“He’s ahead of schedule,” Calipari said. “We’ll have to wait and see. I hope (he returns soon), but I have no idea.”

Now that his experienced players are getting closer to being healthy, Calipari welcomed the return of his point guard, who gave the Wildcats a boost on the perimeter off the bench. Wheeler was glad to be back on the floor.

“It was great (being back on the court),” he said. “It was a lot of fun to play basketball again.”

Sitting out wasn’t easy for Wheeler, but it did provide insights for the senior guard and especially his new teammates.

“I learned that the game is way faster (than I thought),” he said. ”When you are actually in the game, the game is so much faster. I like a fast game where it’s high possessions and (you can) get everybody involved (on offense).”

“(I learned about) their tendencies, where they like the ball and continue to find ways we can grow closer as a team so we can continue to win,” he said.

Wheeler’s teammates also enjoyed having him running the offense and making stops on the defensive end of the court.

“He just brings something that nobody in the nation can bring (to the court),” Kentucky junior forward Jacob Toppin said. “He speeds up the game, which is good for us, and he can guard anybody 94 feet. It’s definitely good for him individually and for us as a team.”

The presence of Wheeler was a headache for the Dukes Friday night. Duquesne coach Keith Dambrot said Wheeler’s presence disrupted his squad and added Wheeler’s ability to distribute the ball was a difference in the outcome.

“That was probably the key to the game,” the Duquesne coach said. “We didn’t guard the ball very well.”

Antonio Reeves and CJ Fredrick continued to connect on 3-pointers, making a combined 8-of-13. They finished with 18 and 14 points, respectively. Wheeler collected 11 points and 11 assists.