Winchester honors those that served on their special day 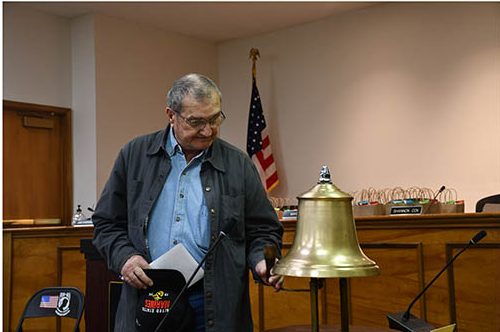 Local veterans rang a bell on Friday to commemorate their service on Veterans Day. (Photo by Warren Taylor)

Winchester is a community that loves to honor its veterans, and it did so again on a rainy Friday at city hall during the 2022 Veterans Day Recognition Service.

And on a day when they are honored, the event’s featured speaker, U.S. Army Reserve Staff Sgt. James Martin told the veterans assembled they had no reason to be shy about their service.

“I am surprised that veterans are humble or even surprised by people who thank them for their service or want to offer them a discount or a free meal,” Martin said.

For some veterans, especially those that served during the Vietnam War, thanks were hard to come by when they returned home from their tour of duty.

“I hope now that from you fellow Americans, it is a grateful nation that you see,” Martin said.

The staff sergeant had a personal example of a veteran who was a little bashful about receiving attention for their service, his grandmother.

Naturally, Martin’s grandmother received one of the biggest fusses a veteran can get when she participated in an honor flight to Washington, D.C., several years ago.

Martin said that she was amazed by the cheering crowds and news crews. During the trip, her biography was enshrined at the Military Women’s Memorial at Arlington National Cemetery in Virginia.

“I saw her emotional for the first time in my life. My grandma did not get emotional, and she said, ‘I feel like a queen,’” Martin said.

He also reflected on how small the percentage of the U.S. population that has served in the military truly is.

The military is also different than most other jobs, according to Martin.

“Most civilians can quit their job or move whenever they want, and they call tell their boss to take a flying leap without facing criminal charges,” he said.

Martin noted that only a judge and a military commander can punish adults for wrongdoing.

Following Martin’s remarks, veterans were given a chance to announce their service and then ring a bell, a tradition that the city started several years ago on Memorial Day and Veterans Day.

The ceremony began with a prayer by U.S. Army veteran Roy Hudson.

Winchester Mayor – and Marine Corps veteran – Ed Burtner then lead the crowd in the Pledge of Allegiance.

After Winchester resident Perri Wilson sang the National Anthem, Larry Hall of Rolling Thunder Kentucky Chapter 5 spoke about the non-profit’s efforts to honor service members that have been killed or are classified as missing in action.