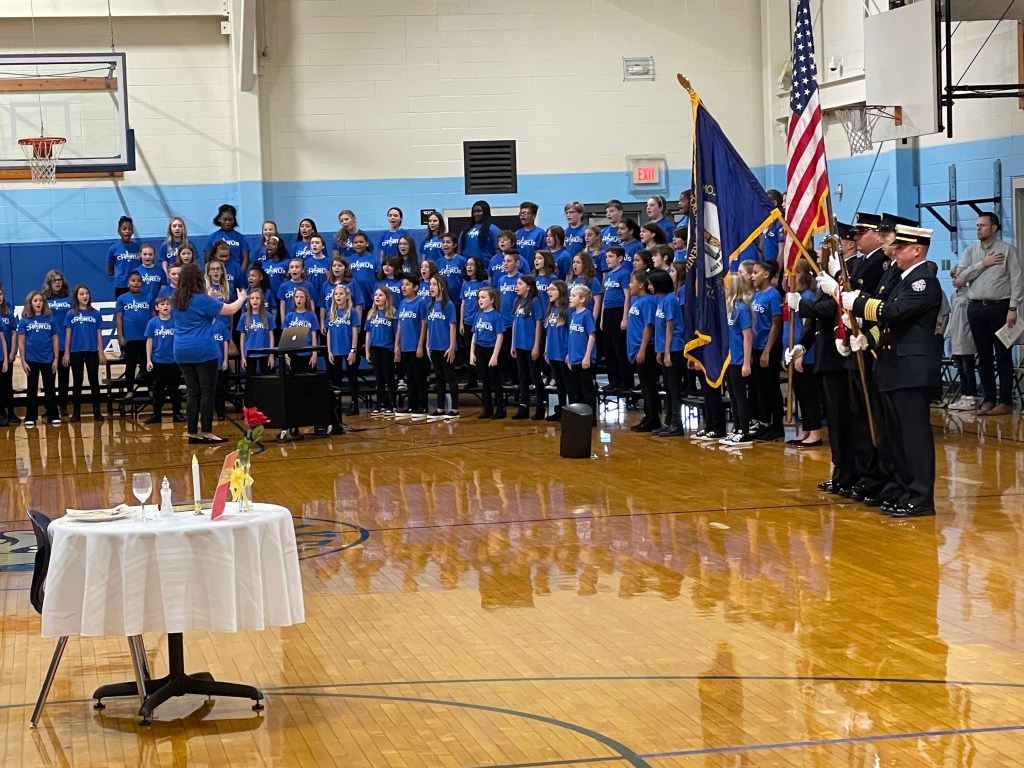 Baker Intermediate School was one of several in the Clark County district to honor veterans on Friday. (Photo by Matt Cizek)

During Veterans Day, many schools and other organizations honored those willing to make sacrifices.

At Baker Intermediate School, one such ceremony occurred.

Both kids and adults honored each branch of the Armed Forces as the school put on its ceremony, paying tribute to veterans.

“It’s truly a school-wide event, and it’s not one teacher, it’s not one class. It’s everybody”, said Principal Josh Mounts. “We always want to make it a special day for [veterans], and we did so today…I’m proud of our kids and staff and proud of our school.”

While an assembly started at 9:30 a.m, the day’s festivities began even sooner.

Veterans and others could walk past several flags lining the sidewalks around the school as they entered the cafeteria for a special breakfast at 8 a.m.

After an hour and a half, students gathered inside the gymnasium for the ceremony and sat in the stands.

Notably, veterans from the neighborhood were welcomed and sat at ground level.

As the Veterans Day celebration began, the United States Flag and Kentucky State Flag were presented along with the National Anthem.

After student Hunter Ward read an excerpt from Francis Scott Key – to whom “The Star-Spangled Banner” can be credited – those in the audience joined in reciting the Pledge of Allegiance.

Shortly after that, Principal Mounts spoke.

“Veterans Day gives us an opportunity to pause, reflect, and think of our nation’s veterans. It’s a chance for our students to see what true heroes look like”, he said. “ Most importantly, it gives us a chance to say thank you and to honor the men and women for their service and their defense of liberty both home and abroad.”

Principal Mounts was not the only member of his family to be present.

He would later be recognized with a standing ovation.

Following Principal Mounts’ address, each of the five branches of military members present – the Army, Marines, Air Force, Navy, and Coast Guard – had their respective branch’s theme played by the school’s chorus in a song titled “A Tribute to the Armed Forces.”

With veterans asked to stand, each received a round of applause.

Ward, an army veteran, spoke of his experience joining the military and how many were motivated to do so following the tragic events of September 11th.

He also touched on the theme of honor.

“I will tell you to a man or woman [that] everyone who signs up…has no idea what they’re getting into…that realization comes over time”, he said. “Once they assume that role, what they’re saying is they’re making a pledge and commitment.”

For this reason, Ward encouraged students to speak with veterans if interested – as many would provide answers and insight.

Towards the end of the event, Ward would receive a plaque while other students continued speaking about the importance of veterans.

One even read a quote from former President Harry Truman.

Stating among many points that they made them feel safe and helped in times of trouble, a line of students thanked veterans on behalf of Baker Intermediate School.

The ceremony came to a close shortly afterward.

However, the respect and honoring of veterans shall continue.

“Our veterans are the brave 1% who safeguard the 99%”, Mounts said.